The Aundha Nagnath temple is an ancient temple dedicated to Lord Shiva, one of the Holy trinity in the Hindu pantheon. Shiva is known as Lord Nagnath and the temple is believed to be one of the twelve Jyotirlingas. It is located in the Western Indian state of Maharashtra, which has not less than five Jyotirlinga temples. The Sanctum Sanctorum is located below ground and accessed by steep steps. Unlike other Shiva temples, there is no Nandi Idol in front of Mahadeva, but there is a separate shrine for Nandikeswara at the back of the main temple. It is a popular pilgrim and tourist center, with people from all over the world visiting it to seek the Lord’s blessings.

It is believed that Yudhishtra built this temple while in exile during the period of the Pandavas in ancient Indian History. The current structure is believed to have been built by the Seuna Yadava dynasty during the 13th century. The Mughal Emperor Aurangzeb is also believed to have sacked and plundered the temple during his reign. It was later renovated and repaired by Rani Ahalya Bhai. In spite of the ravages of time, this edifice of the Lord has managed to survive and prosper, drawing people by the thousands. 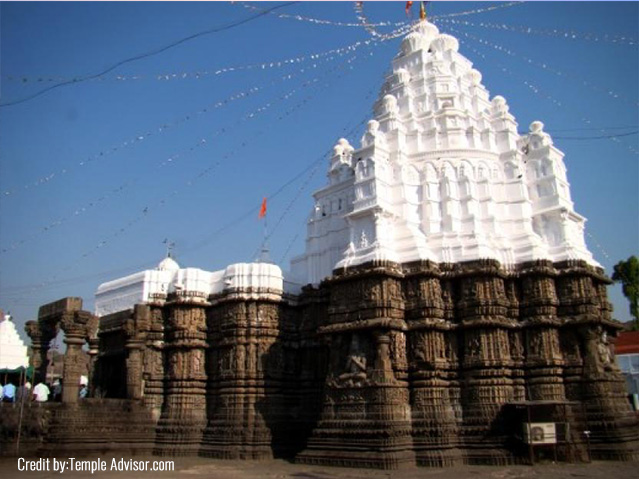 During the Mahabharata times, the pandavas who were in exile for a period of twelve years, built a hermitage in a nearby forest and resided there. Bhima noticed the cows drinking water from the river nearby and releasing milk into the water. The Pandavas intuited that some God must be residing in the river and proceeded to drain the water from the river. They noticed the water boiling after a certain point and Bhima struck the river thrice with his mace. They were astounded when blood oozed out from the spot and a brilliant Linga emerged. With due respect, they then constructed a temple and duly installed the Jyotirlinga.

The temple is closely associated with the revered saints of the Varkari sect of Hinduism namely Namdev, Visoba Khechara and Jñāneśvar. Namdev is said to have been instructed to visit the Aundha Nagnath temple in search of a proper Guru. There are several stories which link these revered saints to this holy shrine and it is believed that even Guru Nanak, the founder of Sikhism visited the temple. The Linga of the temple is believed to be the first Jyotirlinga on Earth and Lord Shiva is revered as Nagnath because he has a snake round his neck. The south facing Linga is oval shaped and made of a stone called Dwaraka Shila. The shrine is revered by Hindus and Sikhs, with many Sikh Gurus offering prayers at the shrine.

The temple is built in the Hemadpanti architectural style and its upper portion was repaired during a later period by the Peshwas. It is built on an expanse of 60,000 sq. ft. of land and the temple itself covers an area of about 7,200 sq. ft. with a height of 60 ft. Apart from its imposing structure, it features several exquisite carvings which are a sight to behold.

The Aundha Nagnath Temple is famous for the annual fair held in the Hindu calendar month of Magha and lasts till the beginning of the month of Phalguna. Apart from that, all auspicious religious festivals associated with Lord Shiva are celebrated with great enthusiasm.

Benefits or Blessings of the primary deity- Aundha Nagnath Temple

Praying in the Aundha Nagnath Temple is said to safeguard against all types of poisons and the association with the Linga reinforces that faith even deeper. Many pray for Lord Nagnath’s guidance to help them tread on the right path of life. Apart from this, devotees pray for health, wealth and prosperity with many visitors offering prayers just to gain the deity’s favor.

By road: There are regular and frequent buses plying from Aurangabad, Mumbai, Pune, Nagpur and other nearby cities of Maharashtra to the temple.

By rail: The nearest Railway station is Parbhani, which is approximately 50 km from the Aundha Nagnath temple. The station is well linked to other junctions with frequent and regular service. Taxis and buses are available right outside the station for the convenience of visitors.

By air: The nearest airport is located in Nanded which is approximately 54 km from Aundha Nagnath. Taxis and buses ply regularly from outside the Airport to the temple.