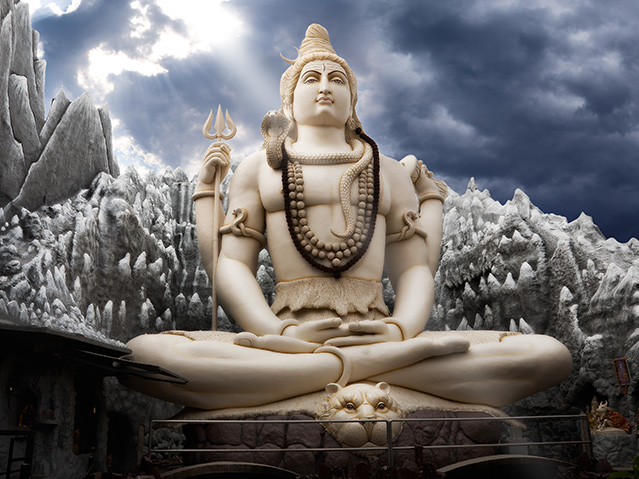 Shiva Temple is one of the modern temples of Lord Shiva, constructed in Bangalore. It is a unique and imposing structure, and that has made this temple, as one among the most remarkable temples for the Lord in our country. The temple is well known for its huge statue of Lord Shiva and also for the beautiful idol of Lord Ganapathi. The temple is located in the Old Airport Road of Bangalore and is well connected with all parts of the city.

History of the Shiva Temple, Bangalore

It was a miracle which was behind the construction of this Shiva Temple. It was founded by a person known as RVM, who is said to have had a vision one fine day, for building a temple for Shiva that contains in it, a huge statue of the Lord. He was initially surprised as he didn’t possess the resources required for the big task, like money and land. But he was driven by the faith that the God who gave him a vision will also provide him the means for making it a reality. He started his endeavours right earnest, looking for land and the wealth to build the structure. God did help him, as he found a property soon, very suitable for a temple. He also arranged for the required funds, and identified the architect who would build the temple, in line with his vision. The temple work and the construction of the huge Shiva idol started in 1994 and got successfully completed in the very next year. The temple looked grand with the sacred presence of the 65 feet tall beautiful statue of Shiva, in a seated posture. It was the auspicious Maha Shivarathri day on the 26th of February, 1995 that this temple was inaugurated by His Holiness, the Shankaracharya of Shringeri, who dedicated the mandir for public worship.

Structure and Architecture of the Temple

It is both the structure and the architecture of this Bengaluru Shiva Temple that makes it stand out among so many temples of our country. With a Shiva Linga that is 25 feet tall, the entrance of the temple complex itself looks magnificent. Inside, one gets overwhelmed by the massive image of Shiva, built in a bright, white marble. He is handsome, is seated in a cross-legged Padmasana posture and is adorned with snakes and rosaries. He has four hands. He holds the damru and the trident in his upper arms, while the lower ones are in a meditative pose, facing upwards and placed one over the other. The idol is surrounded by artificial hills and rocks denoting the Lord’s home of mount Kailash amidst the Himalayan mountains, and is also set in the middle of a large pool of water, symbolizing the rivers and lakes present around Kailash. Lord Ganesha is also worshipped in the temple, while Navagrahas, the nine planets in our solar system also find a place among the deities.

Thousands of devotees visit this temple right through the year for praying to the Lord and their numbers are increasing day by day. Milk abhishekam, archana with flowers, havans, bhajans, aartis etc. are performed to the Shiva Linga and special worships are offered to him by the devout. People also light lamps as a form of prayer. It is believed that praying to the Lord and touching his idol can solve the devotees’ problems and hence people flock this temple in large numbers, seeking relief from various difficulties. The occasion of Maha Shivratri involves a very big celebration.