Tirupati Balaji temple is a very famous Hindu Vaishnavite Temple dedicated to Lord Venkateshwara, an incarnation of Lord Vishnu, situated in the hill town of Tirumal at Tirupati, Andhra Pradesh. It is believed that Lord Vishnu himself appeared here to save mankind in the troublesome Kaliyuga. Complying with this belief, the place is also known as Kaliyuga Vaikuntam and the Lord is also called as Kaliyuga Prathyaksha Daivam. 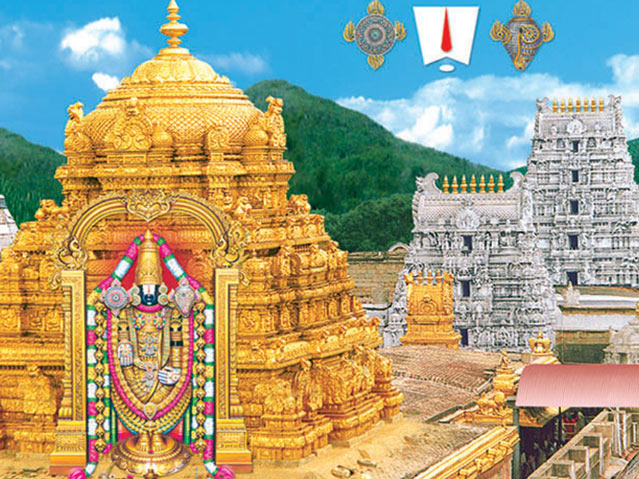 The Tirumala hills are situated 853 m above sea level and comprises of seven peaks, representing the seven heads of Adisesha (Holy snake and Lord Vishnu’s protector). The names of the seven peaks are Seshadri, Neeladri, Garudadri, Anjanadri, Vrushabhadri, Narayanadri and Venkatadri. The temple lies on the seventh peak -Venkatadri, on the southern banks of Sri Swami Pushkarini, a holy water tank. Hence the temple is also referred to as "Temple of Seven Hills".

The antiquity of the Tirupati Balaji Temple has been mentioned in several literary works and several sacred texts or Puranas such as Varaha Purana and Bavishyottara Purana. All the major dynasties who have ruled the Southern India such as Pallavas of Kancheepuram (9th Century), Cholas of Tanjore (10th Century), Pandyas of Madurai (14th Century) and the rulers of the Vijayanagar (14th and 15th Centuries)have been ardent devotees of Lord Venkateshwara and have made huge contributions and endowments to the temple.

In 1517, Vijayanagara Emperor Krishnadevaraya donated gold and jewels during his temple visits, thus enabling the main sanctum – Ananda Nilayam to be gilded. Maratha general Raghoji I Bhonsle visited the temple and set up a permanent administration for the conduct of worship in the temple.

During Kali Yuga, Rishis (Sages) were performing a Yajna (fire ritual) and were asked by Narada as to who will bear the fruit of the Yajna. They decided to send Sage Bhrigu to test the God Trinity to find out who is fit for the fruits of the sacred ritual. The sage had an extra eye in his feet. He visited Lord Brahma at Satyaloka and Lord Shiva at Kailasha and went un-noticed. Angered by this, he reached Lord Vishnu’s abode Vaikunta where Vishnu was lying on his snake bed (Adisesha) and Goddess Lakshmi was massaging his feet.

On seeing this, Sage Bhrigu got infuriated thinking that Vishnu was pretending to sleep to avoid him and kicked the Lord in his chest. Vishnu opened his eyes and pacified the sage by pressing his feet, thereby squashing his third eye. However, Lakshmi was furiously angry at the Sage for kicking Vishnu in his chest, where the Goddess resides and left Vaikunta.

Lord Vishnu bore the human form of Srinivasa in Tirumala Hills and married Padmavati, daughter of Akasaraja. On hearing this, Goddess Lakshmi reached Tirumala to question Vishnu about the wedding. It is told that Srinivasa turned into stone when he encountered by Lakshmi and Padmavati. They were insisted by Lords Brahma and Shiva to turn into stone as well, as their wish was to be with the Lord forever. Lakshmi stays on the left side of his chest and Padmavati on the right side.

Tirumala Tirupati is the richest temple in the world in terms of wealth and donations received. The temple is visited by about 50,000 to 100,000 pilgrims daily (30 to 40 million people annually on average), while on special occasions and festivals, like the annual Brahmotsavam, the number of pilgrims shoots up to 500,000, making it the most-visited holy place in the world.

Architecture of the Tirumala Tirupati Temple

Tirupati Temple follows Dravidian architecture. The Garbagriha or the Sanctum Sanctorum is called Ananda Nilayam with Lord Venkateswara as the presiding deity, facing in the east direction. There are three Dwarams (entrances) that lead to the Garbagriha. Mahadwaram from the outer compound wall, Vendivakili, the silver entrance through the inner compound wall and Bangaruvakili, the Golden entrance that leads into the Garbagriha.

There are two circumambulation paths around the temple – Sampangipradakshinam and Vimanapradakshinam. The presiding deity is in standing posture and has four hands with one hand in blessing posture, one on the thigh and the other two holding the conch and chakra.

A huge list of 433 festivals is celebrated during the 365 days of a year. Sri Venkateshwara Brahmotsavam is the major event of the temple celebrated every year during the month of October. During Brahmotsavam, the processional deity Malayappa accompanied by his consorts Sridevi and Bhudevi is taken in a procession in the four streets around the temple in different Vahanas (Vehicles). Rathasapthami is a similar festival when Lord Malayappa is carried around the temple in different Vahanams, celebrated during the month of February.

Vaikunta Ekadasi is another important festival celebrated at Tirumala Tirupati, on which day it is believed that the doors are open to Vishnu’s abode – Vaikunta. On this day, around 1.5 lakh devotees crowd the temple to get the Darshan of the Lord. Other annual festivals at Tirumala include Rama Navami, Ugadi, Janmashtami, Teppotsavam (Float Festival), Pushpa yagam, Pushpa pallaki, Sri Padmavati Parinayotsavams, and Vasanthotsavam (spring festival) conducted in March–April.

Many Puranas (religious scriptures) claim that worshipping Lord Venateshwara at the Tirupati Balaji temple and seeking his divine blessings is a surefire way to gain Mukti or salvation and liberate self from the cycle of birth and death. The sanctity and sacredness of the shrine is mentioned in several Puranas such as Garuda Purana, Varaha Purana, Markandeya Purana, Brahma Purana and so on.

The Lord of the seven hills grants his devotee of his wishes and desires and blesses them with a peaceful and prosperous life. Those who come to have a Darshan of Lord Venkateshwara, gets all the benefits of visiting pilgrimage sites, meeting the sages and knowing the ancestors.

How to reach Tirumala Tirupati Temple

By Air: The nearest airport to Tirumala is near Renigunta about 15 km from Tirupati. This domestic airport has direct flights to Hyderabad, Visakapatnam, Chennai, New Delhi and Bangalore and is now being upgraded to an International airport.

By Road: Tirumala has direct bus services from Tirupati with a frequency of a bus for every 2 minutes. It also has direct buses from Chennai, Bengaluru and Vellore. Paid taxis and private bus operators also ply buses from nearby cities such as Chennai, Hyderabad, Vishakapatnam and Bangalore to Tirupati.

On Foot: Many devotees climb the hills to Tirumala on foot to fulfill a vow. There are two well-laid stone footpaths leading to Tirumala.