Thirunageswaram temple is dedicated to the Planet Rahu and lies on the Kumbakonam - Karaikal bus route. It is just 5 km from Kumbakonam. The presiding deity is Lord Nageswar, Lord Naganadhar, and Lord Shanbagaranyeswar in the form of Swayambu (self-manifested). His consort graces from this temple in the name of Girigujambigai. The Goddess is enshrined with Goddess Lakshmi and Goddess Saraswati by her side. The sacred tree is the Shenbaga tree. Theertham (holy water body) is known as Surya Pushkarini. This is the place where Lord Shiva was worshipped by the divine serpents- Adiseshan, Dakshan, and Karkotakan, hence it is known as Thirunageswaram. Shaivite trinity saints have sung many hymns praising the Lord of this temple. Rahu, with his two consorts, Nagavalli and Nagakanni, is in a small separate shrine in the outer corridor.

History and Legend of Thirunageswaram Temple 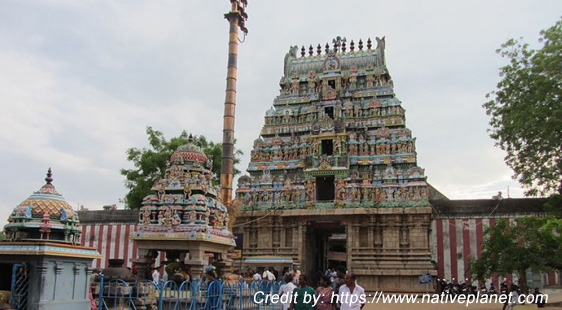 This shrine has significant legends connected to it. This was the temple where Rahu found a remedy for his diseases. Lord Shiva was discovered under the Shenbagam tree. In this shrine, NandiLord Ganesha also earned the status of the Head of Ganas after doing a hard penance in this temple. Indra worshipped Goddess Girigujambal with Punugu, a variety of perfume, and got relieved from the bad smell that was disturbing him. Many saints like Gowthama, Vasishta, Parashara, King Nala, the Pandavas, and Bhageeratha obtained relief after worshipping Lord Naganatha Swami.

This temple belongs to the 9th century and was built by Chola Kings. Later, more halls, corridors, and special towers were added by the Nayaka Kings during the 17th century. The unique feature of this temple is that the Lord will appear with a human head; otherwise, he appears with the head of a serpent. This temple is built in the Dravidian style of architecture. It has several towers or Gopurams on all four sides, which mark the entry to the temple. The temple houses long corridors with pillars of intricate carvings. Stucco images are also a unique feature in this temple.

While anointing the statue of Rahu with milk, the milk turns blue. Abishekam during Rahu Kalam is one of the most important rituals that is being followed in this temple. The major festivals celebrated here are Chithirai Brahmotsavam, which happens during April. The festival is celebrated for ten days. Aadi Pooram, Masi Magam, and Thai Poosam Theppotsavam (float festival) are also celebrated here.

Benefits of Worshipping at Thirunageswaram Temple

Praying to Rahu in this temple would reduce the adverse effects of this snake planet. People pray here to get remedies for delays in getting married, troubled conjugal life, childlessness, ill-effects of snake afflictions such as Kala Sarpa Dosha and Sarpa Dosha.

How to reach Thirunageswaram Temple

Tiruchirapalli International Airport is the nearest airport to this temple.

Tanjore railway junction is the nearest railway station, from where it is connected by plenty of local transport.

Buses are available from Kumbakonam, which is 8 km from this temple. Local transport can drop one very near the temple. Roadways offer huge connectivity.