Srirangam Renganatha Swamy Temple is located near Tiruchirapalli. River Cauvery flows between two cities, making the town of Srirangam as a small island. Being the first Dhivya Desham (Holy Shrine) among other famous 108 temples, it is revered as “Boolga Vaikundam”, meaning earth’s heaven.  A bridge that starches almost a kilometer flows on top of river Cauvery and connects the two the cities. The temple is a graphic incarnation of beauty and devotion. This is one of the huge temples across the world, which is more than 156 acres. The mystical land will embrace the pilgrims and makes it a splendid experience that could be cherished a lifetime.

History and Legend of Srirangam Temple: 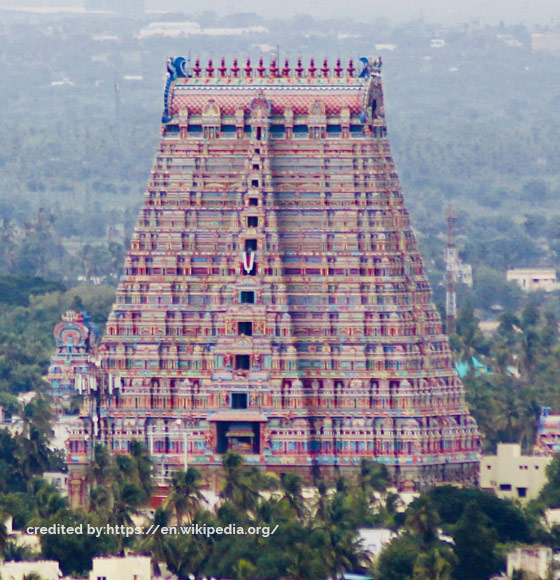 According to the legends, the Vimana of this temple was originally found by Lord Brahma while churning the ocean. It was brought to earth by severe austerities performed by King Ikshvaku, the forefather of Lord Rama. It remained in their lineage for several centuries, where the Vimana would be passed to a king after kings. After Lord had his victory over Demon Ravana, he gave the Vimana to the Vibishana, brother of Demon Ravana. It was consecrated by Lord Ganesha in the form of a small boy, who wanted the Vimana not to taken to Srilanka with King Vibishana.

It is one of the oldest temples, and much revered by Vaishnavites. It has a splendid history which started from 4th century AD, has great inscriptions in the temple was that of the 1st millennium AD. It has withstood several invasions. It is in this temple, Poet Kambar has staged his great work “Ramayanam”.

“Renganatha Swamy Temple”, is a huge complex, comprising 50 shrines for deities. There are several shrines for Goddess Lakshmi, Goddess Bhudevi, Lord Kothanda Ramar, Lord Chakaratalvar, temple tanks, pillared halls, and open space where the festivals are conducted. With over 21 towers, where some are gold plated, it has intrinsic carvings too, which leaves the spectator thoroughly spellbound. The prominent temple tower here needs a special mention, as it is 239.5 feet tall and tallest in Asia, and was constructed around 25 March 1987. The temple is being constructed from thick and huge rampart walls made of granite. They run along with the sanctum for the devotees to ambulate the shrine. Another breathtaking marvel of this temple is the “Saint Ramanuja's body”, which is still being preserved and is open for public. It is believed that the sanctum of Saint Ramanuja is highly mystical, and radiates a lot of powers.

There are many festivals celebrated in this temple. Jestabishekam is an annual cleansing ritual performed in the temple. Krishna Jayanthi and Bramothsavam are celebrated with great reverence. Vaikunta Ekadasi is an iconic festival of Srirangam, where it is celebrated for more than 12 days. Gajendra Moksham is the day when the elephant gained salvation. The month of Aadi is highly distinct, as the Aandal shrine is highly venerated. Deepavali,  Pongal, and Tamil New year day are other important festivals.

Lord Ranganatha is a great mystic. He grants the boon of his devotees, and help them to gain salvation. Goddess Lakshmi is the goddess of wealth and would bestow a lot of wealth for her devotees. People with troubles by their enemies would worship the “Sakartalvar”, where he protects his devotees like an amulet. People who want relief from mental pain, agony, and grants salvation. People who want to have a good career, education, and promotion in their jobs perform special Puja.

How to reach Srirangam Temple:

Trichy has an international airport which is just fifteen kilometers away from the temple. A lot of local transports are available from the airport to the temple.

The Srirangam city is well connected from various parts of  Chennai, Tamilnadu. It has its own railway station, very much nearer to the temple.

There is a bus stop very near to the temple. There is good connectivity through roadways.