This temple of Masani Amman is located at Annaimalai near Pollachi, Tamil Nadu. It is one of the unique temples of Tamilnadu, which is built upon the cremation ground. The deity is in the sleeping posture and is almost seven feet long. This temple is the court of Justice, for all the people who got cheated, those who lost their property and money by the injustice of others, people who got mercilessly suffer out of the wrath of their enemies, will pray in this temple to get justice. 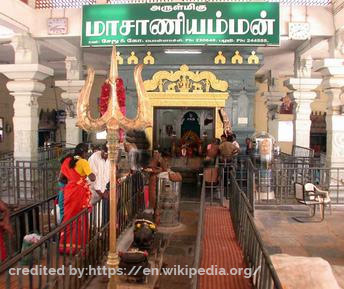 Once a king named Kootru Nannan had a mango grove, and his love towards mangoes was very high. He never shared the fruit to anyone, nor he let anyone enjoy it. Once a mango slipped while plucking, and fell on the river. A woman was bathing in the river, unknowingly tasted the fruit that it belonged to the King’s grove. Furious king beheaded the lady. From then, she was worshipped as Masani and fights against injustice.

Once a demon named Magudasuran gave enormous troubles to the people of the town and even enslaved them. His troubles grew beyond a point where no one was able to save the people from the cruelty of the demon. To put an end to all these, a village priest created a holy fire using kerosene from the cremation ground. Goddess Masani Amman rose from the holy fire, and annihilated the demon, and save the town. There are several mentions about Masani Amman in the spiritual books like Vedas, which says that she had blessed Lord Rama, to conquer Ravana, and to save Goddess Seetha.

The temple is built in Dravidian style architecture, with a five-tier Rajagopuram. She is portrayed in a lying posture, with four hands, with a skull, a serpent, trident, an hourglass-shaped drum called Udukai. The special feature of this temple is the “Stone of Justice”, called Neethi Kal, where the chili paste is smeared by the people seeking justice.

The festival of Mayana Puja is very famous in this shrine. The word Mayana refers to the burial ground. This is celebrated in the month of February-march on the night of Maha Shiva Ratri. On the same day of Maha Shivaratri, the ritual of Elumbukkadi is celebrated on the banks of the Noyyal River for the Goddess Angalamman, who is considered as the guardian angel of Masani Amman. The other important festivals celebrated in this shrine is Adi Peruku, Chithirai Kani.

Benefits of worshipping in this temple:

People in need of justice, will come and grind red chilies, and apply on the stone to pray to Goddess to give justice. People wish their problems should be lessened, and their enemies should get proper punishment. It is believed that the Goddess of justice, will give proper punishment for the enemies, and save the innocent. This temple is also worshipped by pregnant women to have a safe delivery and girls who are suffering from puberty related problems.

How to reach Masani Amman Temple

The nearest airport is in Coimbatore, which is just 65 kilometers.

Pollachi Junction is very close to the shrine and has a lot of trains that stop here.

This is one of the important pilgrim centers and is connected by a lot of buses, both government, and private. Other modes of transport are auto, cabs, and taxis.

The temple of Masani Amman is opened at 6 am and is closed at 8 pm every day.