Sri Kalyana Venkateswara Swamy Temple is a prominent Vaishnavite temple, located in Srinivasamangapuram, which is very near to Tirupathi, Andhra Pradesh. The prominent deity is Lord Venkateswara, who is one of the incarnations of Lord Vishnu. The temple was desecrated by the Islamic invasion and was renovated by Saint Annamacharya. People who are unable to go to Tirupathi will go to this temple. Many people visit this temple and it has become one of the iconic temples of Andhra Pradesh. 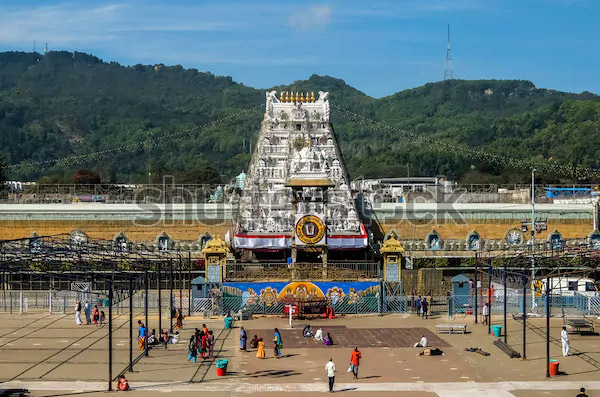 Saint Agastya had advised Lord Venkateswara to stay in this temple after he married Goddess Alamelu. Sage Agastya also suggested halting here, rather than going to Thirumala after his wedding. This is one of the prominent cities visited by several Vaishnavites. Many people perform marriage rituals in this temple, which has been recorded in the ancient scriptures.

This is a Dravidian-style architecture. The sanctum sanctorum is placed on a stone slab. The main deity is Lord Venkateswara Swamy. The statue here is even bigger than that in Tirumala, about 11 feet tall, whereas the idol is only 7 feet tall in Tirumala. The temple was built using rich and black granite stones. There are several intricate carvings, wall murals and stucco images. The temple has a long corridor, where all the important festivals take place.

There are two separate shrines, which house the idols of Goddess Lakshmi Narayana Swamy and Lord Ranganatha Swamy. The idol faces east and holds a conch shell and wheel. The lord also holds Varada and Kati's hand posture in his other two hands. The Archaeological Survey of India has been guarding this temple and it has been declared as one of the monuments of India.

Brahmotsavam is an elaborate festival which is celebrated with great pomp. Kalyanotsavam is the divine wedding ritual of Lord Venkateswara and Goddess Alamelu. Sakshatra Vaibavam is also celebrated in an elaborate manner. Other festivals are Sri Rama Navami, Sri Krishna Jayanthi and Deepavali .

Lord Sri Kalyana Venkateswara Swamy protects and benefits his devotees abundantly. He blesses them with abundant wealth and helps them to remove illusions. Many newly-wedded couples visit this temple to have a blessed marital life.

Tirupati airport is nationally and internationally connected. This is very close to the temple premises.

The Srinivasamangapuram city is well-connected to various parts of India. It has its own railway station, very much near the temple.

There is a bus stop very near the temple. Apart from buses, there are numerous forms of local transport like autos and taxis which can take one very close to the temple. Tirupati Endowment Board makes special bus arrangements.