Introduction about the Dwaraka Tirumala Temple

The Sri Venkateswara Swami Vari Devasthanam is a Hindu shrine dedicated to Lord Venkateswara, an Avatar of Lord Vishnu, the preserver and protector of the Universe. It is located in Dwaraka Tirumala, a small village in the state of Andhra Pradesh in India. The area is especially renowned for the presence of the shrine and is about 40 kms away from Eluru, the headquarters of West Godavari District. This sacred shrine is named after the great saint Dwaraka who underwent severe penance to install the Idol of Lord Venkateswara in this place. Fondly referred to as ‘Chinna Tirupati’, this highly revered shrine is venerated by devotees as a miniature form of the original temple located in Tirupati. The Idol installed in the temple is said to be self-manifested and invested with the powers of the Supreme Being. The temple is a highly popular pilgrimage center for Hindus and attracts visitors from all parts of the country and the world. 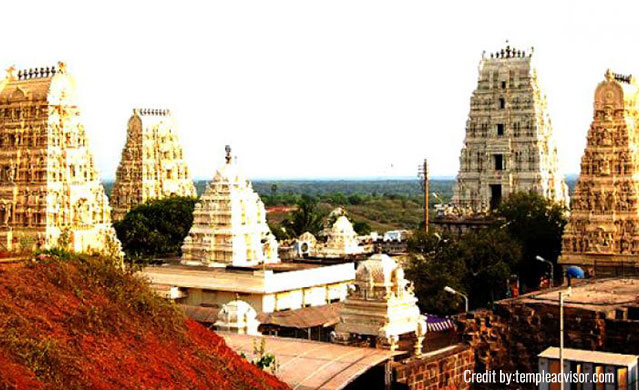 History of the Dwaraka Tirumala Temple

The origins of the temple can be traced back to as early as the Kruta Yuga. This ancient shrine was once graced by the presence of Lord Rama, who worshipped Lord Venkateswara before performing his nuptial ceremony.

Recent history indicates that the shrine was built in 1877 – 1902 by Dharma Appa Rao and the precious ornaments were given by Rani Chinnamma Rao.

Significance of the Dwaraka Tirumala Temple

The path leading to the ancient shrine of Lord Venkateswara takes a serpentine pattern, indicating the presence of Lord Vishnu’s Sheshnaga. The main shrine of the temple houses the Sanctum Sanctorum where the Idol of Lord Vishnu is placed. The image here is partially buried in the Earth with only the upper part visible. The full size image of the Lord stands behind the main image and is believed to have been placed there by Srimad Ramanuja. There are also several shrines dedicated to various Gods within the temple complex. Devotees pay obeisance to all the deities and take the blessings of all the Gods.

Architecture of the Dwaraka Tirumala Temple

The temple is a magnificent structure and considered a masterpiece of South Indian architecture. The main Rajagopuram rises till a height of five storeys and faces the South. Three other Gopurams are built on the other sides, facing all the other directions. The Vimana of the shrine is built in the Nagara style and the old Mukhamantapa was recently renovated. Sandstone tiles have been used extensively and cover the entire complex. Trees of all kinds surround the entire complex, lending a serene and calm ambience.

All Vaishnavite festivals are celebrated in the Dwaraka Tirumala Temple and the Lord is venerated with great fervor on these occasions. Rama Navami, Krishna Jayanthi and Janmashtami are some of the festivals observed in the temple.

Benefits or Blessings of the primary deity- Dwaraka Tirumala Temple

Lord Venkwateswara is world famous as a deity and he bestows wealth & prosperity on his devotees. He is regarded as the guardian of all the riches the world has to offer and his consort distributes the wealth. People from all over the world worship the Lord to gain his favor and enjoy his patronage as the God of wealth.

Location – How to reach the Dwaraka Tirumala Temple

The Dwaraka Tirumala Temple is located in the West Godavari District of Andhra Pradesh, about 40 kms from Eluru. Regular buses and taxis connect the temple with the rest of the state and the neighboring cities.

By Air: The nearest Airport is located in Rajahmundry about 75 kms away.

By Train: The nearest Railway Station is located in Bhimadole, about 15 kms away.

By Bus: The temple is accessible by bus from Bhimadole, which is about 15 kms away.