Introduction about the Teli Ka Mandir

The Teli Ka Mandir is an ancient Hindu shrine located within the premises of the Gwalior Fort in the Northern Indian state of Madhya Pradesh. The temple is dedicated to Lord Vishnu, the preserver and protector of the Universe. He is revered here in the form of his mount, Garuda who is represented by an enormous image in the temple. This image encircles the doorway and is a major attraction of the temple. It is also the oldest and highest structure within the fort complex, rising to a height of 100 feet. The temple is currently under the aegis of the Archeological Survey of India, who is responsible for the maintenance and upkeep of the shrine. It is a popular and much visited tourist center, frequented by people from all over India and the world. 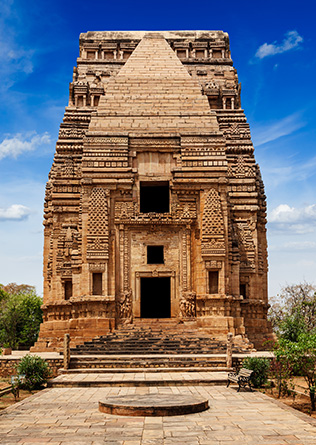 History of the Teli Ka Mandir

This magnificent shrine was built by members of the Teli community (oil merchants) and hence referred to as Oilman’s temple. It was built during the 8th or 9th century during the reign of king Mihirabhoja of the Pratihara dynasty. The Telang Brahmins were entrusted with the task of presiding over all religious ceremonies after Gwalior fort was captured by the Rashtrakutas sometime during the 8th century. The British reportedly used the temple as a soda factory during the revolt of 1857. Repairs were carried out between 1881 and 1883 by a British officer Major Keith, who was then stationed in Gwalior.

Significance of the Teli Ka Mandir

The management of affairs by the Telang Brahmins is believed to have given the temple its unusual name of Teli Ka Mandir. Even the fact that the temple is linked with the Telengana region could have contributed to its taking this name. The flying Garuda at the doorway is a delight to view and the various unique features of the temple reflect the rich heritage and culture of India.

Architecture of the Teli Ka Mandir

The Teli Ka Mandir is a fusion of the North Indian Nagara and South Indian Dravidian style of architecture and also shows signs of Buddhist influence in its style of construction. The rectangular design of the structure is complemented by an oblong vaulted roof built in Buddhist style. A flight of stairs leads to a banded doorway adorned with sculptures of River Goddesses and other figures. Shaiva and Shakta Dwarpalas are shown in the inner and outer doorways, which indicate the temple’s association with the Goddess Shakti. There is no mandap in the shrine and the Sanctum Sanctorum is accompanied by a porch and doorway. The outer walls are replete with sculptures of various Hindu deities which are elaborately carved. The unusual blend of two prominent styles of architecture adds to the mystique of the temple and attracts scores of visitors every year.

Benefits or Blessings of the primary deity- Teli Ka Mandir

Lord Vishnu is considered the embodiment of mercy and compassion. He grants health, happiness and prosperity to those who worship him and grants the desires of his devotees. Lord Vishnu is also the guardian of wealth and devotees who pray with a clean and pure heart are blessed with his generosity.

Location – How to reach the Teli Ka Mandir

This temple inside the Gwalior fort is easily accessible by various modes of transport.

By Air: The Gwalior Airport is about 8 km away from the temple.

By Train: The Railway Station in Gwalior is also about 8 km from the temple.

By Bus: Gwalior is well connected with neighboring towns and cities by bus service.

Local Transport: Taxis, local buses and three wheelers are available from various points of the city to take one to the temple.