Sri Somnath Temple is one of the Jyothirlingams, and it is found on the Western Coast of Gujarat in the city of Prabas Patan. It has been reconstructed several times, because of the Islamic invasions. Lord Shiva is also called Somnath, which denotes the Lord of the Moon, as Lord Chandra built a shrine for Lord Shiva in gold. Lord Krishna built a shrine for Lord Shiva in sandalwood, and King Ravana erected a silver shrine for Lord Shiva. Supposedly, Lord Shiva appeared as a fiery column. The current shrine was completed in May 1951. It was started on the orders of then Home Minister of India, Mr. Vallabhbhai Patel. The temple was completed after his death. This is an important pilgrim center of Gujarat, and a lot of devotees come to worship in this shrine. 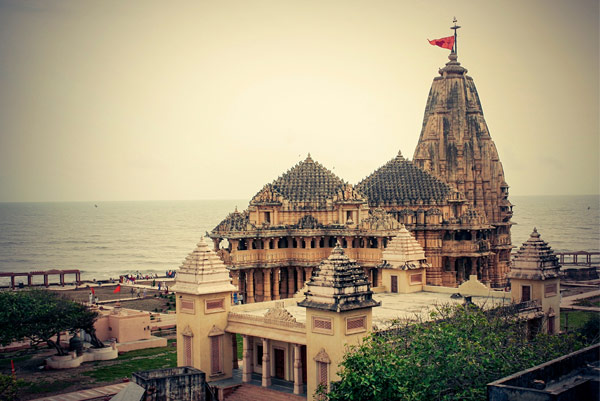 The temple of Somnath occupies an important position among the pilgrim sites across the world and is highly important for the Saiva sect. It is found on the banks of Triveni Sangamam, where three rivers confluence. During the Islamic invasion, the Muslim invaders broke the idol of the Lord and plundered the wealth of the temple. They also killed many Hindus. The blood bath and the gory history of Somnath are still remembered by millions of people. The temple was the constant target of Islamic invasions and was rebuilt several times.

The temple has a close connection with Lord Chandra, who was cursed by Daksha, his father-in-law. Chandra married the twenty-seven daughters of King Daksha, but he was close only with Rohini and neglected his other consorts. The enraged Daksha cursed the Moon to lose his luminescence. Lord Chandra requested Lord Brahma for a remedy. He was told to go to the town of Prabhas, and take a holy dip in the Prabhas Teertham, and meditate on Lord Shiva with great piety. Lord Chandra obeyed the words of Lord Brahma and performed severe penance. As the fruit of his devotion, he gained back his luster and radiance, but only for part of the month. Thus the waxing and waning of the Moon are because of his blessings from Lord Shiva.

The Architecture of Sri Somnath Temple:

The current shrine is located where there is no land in a straight line between the Somnath seashore until Antarctica. The original temple of Somnath was built during pre-Vedic times by Lord Krishna himself with sandalwood. The second temple was built in the same spot by the"Yadava kings" of Vallabhi. The temple Shikara or the temple top is 15 meters high and has an 8.2-meter flag top. It is constructed in the Chaulukya style of architecture or Kailash Mahameru Prasad style, which reflects the skills of Gujarat artisans.

There are many festivals celebrated in this temple. Among them, Shiva Ratri and Navaratri are highly celebrated, where all the ten days are filled with a lot of celebrations.

Lord Shiva blesses his devotees with a greater level of spirituality. He helps them to attain a problem-free life. He helps his devotees to achieve greater success in life. People with challenges in job, family, and children pray to the Lord to resolve them and lead a happy life.

How to reach Sri Somnath Temple:

The nearest international airport is Diu Airport, which is just 63 kilometers away from the temple.