Introduction about the Shrinathji Temple

The Shrinathji Temple is a sacred Hindu shrine located in the city of Nathdwara in the state of Rajasthan in India. The temple is dedicated to Lord Krishna, an Avatar of Lord Vishnu in human form. The divine form of Shrinathji is said to be Swayambhu (self-manifested) and symbolizes Krishna in child-form. The image is made from a single slab of black marble which portrays Krishna as lifting the Govardhan hill with one arm raised. The Lord is depicted with his left hand raised and the right hand at the waist, along with a large diamond placed beneath his lips. The Image is exquisitely carved in Bas-Relief, with engravings of two cows, one lion, one snake, two peacocks and one parrot with two sages placed near it. This particular style of carving and engraving has gone on to inspire several forms of religious artworks, popularly referred to as Nathdwara Paintings. The temple today is a much sough-after pilgrim and tourist center, attracting visitors from all over the world. 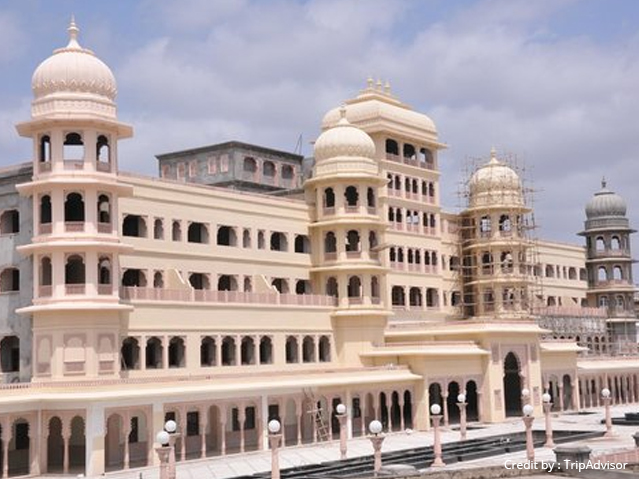 History of the Shrinathji Temple

The temple was built built by Goswami priests in 1672 and the Idol of Lord Krishna was moved to Nathdwara from Govardhan sometime in the late 17th century during a tumultuous time of social and economic upheaval. The present spot of the shrine was chosen due to a quirky incident when the wheels of the cart in which it was being transported sank deep into the mud. This started the priests thinking and they realized that this was the spot the Lord had chosen for building the temple. Following his dictates, they accordingly constructed a shrine at that very spot under the guidance of the then Maharana Raj Singh of Mewar. The shrine is also popularly known as Shrinathji ‘Haveli’ (mansion).

Certain spiritual texts relate the tale of Shrinathji traveling to Mewar to play ‘chaupar’ (a Board Game played with cowrie shells) with a princess of that region. She requested Shrinathji to stay on with her in the palace and he complied with her request but stated that he would one day re-locate to Rajasthan.

Significance of the Shrinathji Temple

The worship in the Shrinathji temple is conducted by the direct male descendants of Vallabacharya in a Haveli in Nathdwara, Rajasthan. Medieval devotees used to adore Lord Shrinathji and several preachers established temples dedicated to him in Dera Ghazi Khan, which today lies in Pakistan. One such devotee, Shri lalji Maharaj is credited with establishing Shrinathji temples in various parts of the country. The fame of the Lord has even spread to some faraway countries like Russia too, where he is still worshipped in some regions.

Architecture of the Shrinathji Temple

The temple is sometimes referred to as Nanda Bhavan or Nandalaya, since the design draws inspiration from the temple of Nanda Maharaj (Krishna’s father). A tall shikhara on which seven flags, including a Sudarshan Chakra are flown, rises into the sky forming the highpoint of the temple. The seven flags represent the 7 houses of Pushti Marg. Since Shrinathji is portrayed as the Lord of the house, the worship conducted here is more like a Sewa and different from other temples. The haveli includes individual strorerooms for milk, betel, sugar, sweetmeats and flowers. The haveli also features a functional kitchen, a jewelry chamber, a treasury, a stable for horses, a drawing room and a gold and silver grinding wheel. The haveli also houses smaller shrines dedicated to Madan Mohan and Naveet Priya.

The temple is bustling with activity during festivals like Janmashtami and other auspicious occasions like Holi and Diwali. The deity is attended to daily like a living entity with the usual functions like bathing, dressing and feeding carried out. Krishna in infant-form is the focus of worship and special care is taken to attend to his needs. The priests who carry out these tasks are descendants of Vallabacharya, who was the founder of the Idol in Govardhan hill near Mathura. Aartis at regular intervals are carried out and the Shringar of the Lord is done with great reverence several times a day. Prayers are offered with diyas, incense sticks, flowers and fruits, among many other things. Devotional songs are sung with great piety and the view of the idol after the curtain is removed is an eagerly awaited occasion.

Location – How to reach the Shrinathji Temple

Nathdwara is easily accessible via Udaipur by Air, Rail and Bus.

By Air: The Airport in Udaipur is about 36 kms away from Nathdwara.

By Train: Udaipur is the nearest Railway station to Nathdwara and around 48 km away from the Shrinathji temple.

By Bus: Several buses ply from Udaipur to Nathdwara at regular intervals.

Taxis are also available from Udaipur to take one to the Shrinathji temple by road. There is a toll to be paid which is borne by the passenger.