Introduction about the Raghunath Jain Temple

The Raghunath temple complex consists of seven sacred Hindu shrines and is located in the Indian state of Jammu & Kashmir. It is one of the largest temple complexes of North India and all the shrines are endowed with a Shikhara. The primary deity is Lord Rama, an Avatar of Lord Vishnu, the preserver and protector of the Universe. Several other deities are installed in the shrines within the temple precincts and the niches in the walls of the shrines within the complex are replete with beautifully carved images. 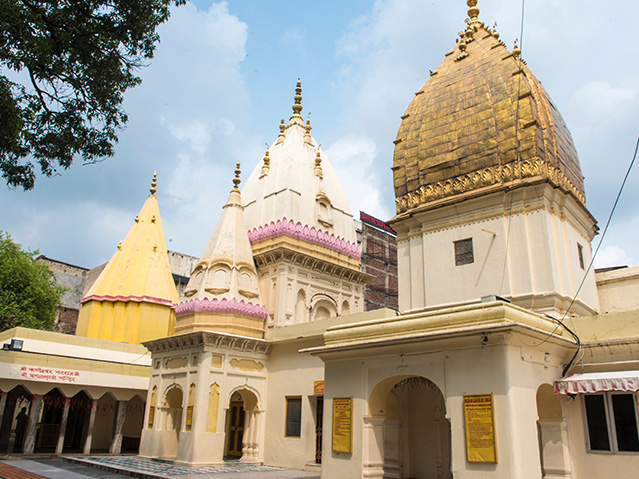 The 15 panels of the main shrine are adorned with beautiful paintings depicting scenes from the great Hindu epics- The Ramayana, The Mahabharata and the Bhagavad Gita. The temple is a popular and much-visited spiritual and religious center, exemplifying the rich Indian heritage it is associated with.

History of the Raghunath Jain Temple

The state of Jammu witnessed a major upsurge in Temple construction during the later years of the 18th century, which continued till the early 1900’s. This is mainly attributed to the Jammu Shivaliks who built several temples in the state, mostly spiral shaped structures with brick and the towers crowned with bright Kalashas soaring skywards. Gulab Singh, the erstwhile ruler of Jammu is credited with starting construction work on this temple sometime from 1822 to 1835. He dedicated the temple to his Guru Baba Prem Das and subsequently the temple was completed by his son Maharaja Ranbir Singh in 1860. However, several inscriptions at the entrance of the temple indicate it was built by Gulab Singh and Dhyan Singh sometime in 1827.

Significance of the Raghunath Jain Temple

The temple complex witnessed a spurt in Sanskrit teachings during the reign of Ranbir Singh, with a large number of Brahmin students availing the facility to further their knowledge. Several foreign texts were also read and translated by Muslim scholars into Sanskrit during this period, especially books on philosophy & history in Arabic and Persian. This was hailed by many as a gesture of fostering amity between the religious communities. The Library within the temple is a repository of several rare Sanskrit works and an extensive collection of reading material is available.

A room also houses a model all the four religious Dhams of Hinduism, which are arranged in such a way that one can see them together, with the Sun centered in the middle.

Architecture of the Raghunath Jain Temple

The temple is a marvel of architecture, with a touch of Mughal influence which suggests an elegant fusion of the two prevalent styles of design from that era. Carvings and arches in the temple are so tastefully crafted that they immediately catch the attention of visitors. The interior walls of the temple are richly decorated with images of various Hindu deities and the Garbagriha (Sanctum) houses the image of Lord Rama The dome of the shrine is built in a pyramidal shape, reminiscent of Sikh architectural design. Gold plated spires adorn each of the seven shrines and a Shivalinga carved out of black rock is installed within one. Brick masonry in the stucco style is finished with plaster and gives the temple a distinctive look. The complex as such is built on a raised platform with an octagonal shape. Several residential buildings and cattle yards are also located within the premises.

This magnificent temple celebrates several festivals on auspicious occasions and all these are observed with great enthusiasm. All events associated with Lord Rama are given due importance, especially Rama Navami, the birthday of the Lord. People from far and wide flock to the temple on these occasions to pay their respects to the Lord and seek his blessings.

Benefits or Blessings of the primary deity- Raghunath Jain Temple

Worshipping Lord Rama is considered highly propitious, since he is the epitome of Dharma and upholds the virtue of selflessness. Devotees who emulate his good deeds benefit manifold from the benign Grace of the Lord and leading an unselfish life helps them attain a higher plane of righteousness.

Location – How to reach the Raghunath Jain Temple

The Raghunath temple is located in the scenic state of Jammu and easily accessible by several modes of transport. The National Highway 1B is within the state and Jammu is well connected by road to other regions of the country.

Timing:The temple is open most days between 6.00 AM to 8.00 PM. However, cameras and mobile phones are not allowed within the temple.

By Air:The nearest Airport is the city of Jammu, around 8 km away from the temple.

By Train:The Jammu Tawi Railway Station is around 3 km away.

By Bus:Jammu is well connected with neighboring towns and cities by bus service.

Local Transport:Taxis, buses and three wheelers are available from various points of the city.