Introduction about the Mahakaleshwar Temple

The Mahakaleshwar Jyotirlinga is a Sacred Hindu shrine located in the ancient city of Ujjain in the state of Madhya Pradesh, India. The presiding deity is Lord Shiva, one of the three Gods in the holy trinity of Hinduism, along with Vishnu and Brahma. Situated on the side of the Rudra Sagar Lake, the shrine houses the self-manifested Lingam of the Lord (Swayambhu), which is believed to be endowed with its own source of power. This temple is regarded to be one of the twelve Jyotirlingams, which are considered the most sacred abodes of Lord Shiva. The Jyotirlingas symbolize the infinite nature of Shiva, with each taking on a different manifestation of the Lord. The temple is a prominent and popular Hindu pilgrimage center which attracts innumerable devotees and visitors from all over India and the world. 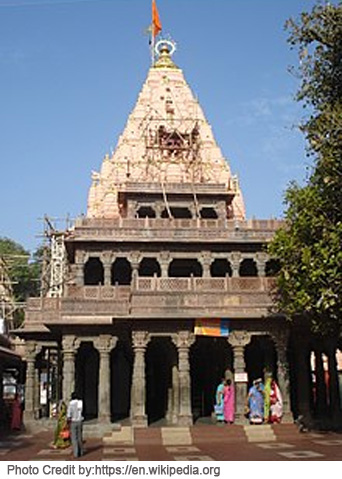 At all these sites, the primary image is  lingam representing the beginning less and endless Stambha pillar, symbolizing the infinite nature of Shiva

History of the Mahakaleshwar Temple

The temple suffered atrocities at the hands of Muslim invaders and was destroyed by Sultan Shams-ud-din Iltutmish during his raid of Ujjain in 1234-1235 AD. It wasn’t until 1736 that the great Maratha general Ranoji Scindia undertook to restore the structure and rescued it from ruin. Subsequently, many further developments and improvements were carried out by other members of his dynasty. These include Mahadji Scindia and Daulat Rao Scindia's wife Baiza Bai, who managed the temple with great zeal and pride. The temple enjoyed great polical and economic status under the reign of Jayajirao Scindia, when many major programs of the erstwhile Gwalior State were held in its premises. Soon after India gained Independence, the affairs of the temple were transferred from the Dev Sthan Trust to the Municipal Corporation of Ujjain. Today, the temple comes under the aegis of the collectorate office of Ujjain District.

Significance of the Mahakaleshwar Temple

This magnificent temple is a three storey structure with the Lingams of Mahakalesvara, Omkaresvara and Nagachandresvara installed in the first, second and third storey respectively. Pilgrims and tourists get to view the holy Nagachandresvara on the occasion of Naga Panchami. The temple also houses a tank constructed in the sarvatobhadra style whose water is considered celestial.

One can see several exquisitely sculpted images while ascending the stairs which were reportedly built in the Paramara period. A large verandah to the east of the tank indicates the path to the Garbagriha. Images of Lord Rama and Goddess Avantika are placed in the north of the temple and there are several Saivite temples in the south. The Lingam of Mahakaleswara is enormous and known as Dakshinamurti since it faces south. This feature is unique to the temple and it is the only Jyotirlinga which faces south. Images of Ganesha, Kartikeya and Goddess Parvati are also found in the Sanctum. The roof of the Garbagriha is wrapped in silver and the walls are inscribed with letterings paying rich tribute to Lord Shiva. The Nanda Dipa is always kept lit and towards the exit, a large hall houses a metal coated statue of Nandi the Bull.

Architecture of the Mahakaleshwar Temple

Though, basically the temple is a planned blend of the Bhumija, Maratha and Chalukya architectural styles, the external façade is built in the North-Indian style. The foundation and platform are built of stones. Most of the upper structure rests on the strong and well-designed pillars and plasters. The massive spire of the temple is a sight to behold and pays rich tribute to the builders.

The temple celebrates several festivals and the Bhasm Aarti is truly special which takes place once a day. It involves worshipping the deity with sacred ash brought from the burning ghats of the cremation ground and is applied on the Lingam before offering prayers. Devotees flock to the shrine during this time to witness this unique ritual which is exclusive to this temple alone.

This ritual symbolizes the cycle of life and death and constitutes an integral part of Hinduism.

Mahashivratri is a major festival observed in the temple and celebrated with great enthusiasm and fervor. A grand fair is held during this time, when night prayers and worship are offered to the Lord. The entire area comes alive during this time, with devotees from all over the country and the world visiting the temple to participate in the proceedings.

Basant Panchami, Holi, Akshaya Tritiya, Naga Panchami and Annakuta are other major festivals celebrated with fervor in the temple.

Benefits or Blessings of the primary deity- Mahakaleshwar Temple

People who worship the Lord here, expecially during Mahashivratri are never touched by sorrow and go on to attain salvation. The Lord is said to grant the wishes of those who worship him with faith and devotion. People offer prayers to the Shivalinga for longevity and to remove evil from all creation, with the ultimate aim of achieving peace and prosperity.

Location – How to reach the Mahakaleshwar Temple

By Air: The nearest Airport is located in Indore, about 53 kms away.

By Train: Ujjain is well connected with the rest of the country by Rail and it is about 2 kms from the temple.

By Bus: Many buses ply to and from neighboring states of Ujjain.

Local Transport: Taxis, buses and three wheelers are available to take one to the temple.