The Kalkaji Mandir is dedicated to the Goddess Kalka or Kali, an incarnation of Goddess Durga, the epitome of pure energy and the driving force of the Universe. The image of Goddess Kali is widely perceived to be a self-manifested one and it is said that she fulfills all the wishes of her devotees. The temple witnesses frenetic activity on religious occasions when people come to get a Darshan of the Divine Mother and seek her blessings. It is a major tourist attraction and visitors from all over the country are known to frequent this shrine, with many people just coming to meditate and offer prayers to Maa Kali. 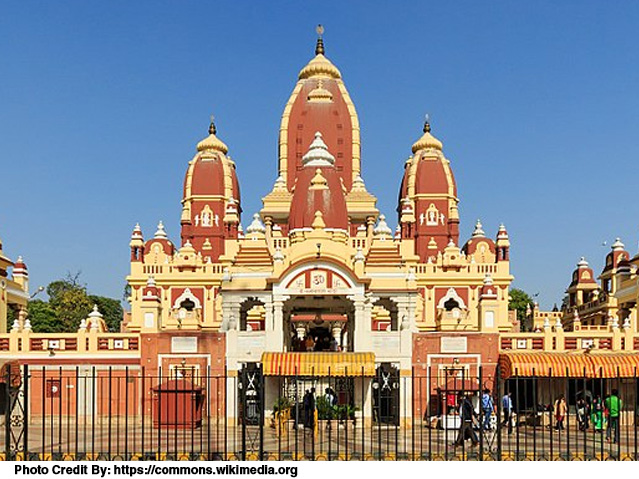 The temple of Kalkaji is perceived to have very ancient origins and the Maratha rulers are believed to have contributed extensively to its construction and renovation. The Peshwar of Emperor Akbar is also said to have made some additions to it and its present form is said to be several hundred years old. Recent additions have included several dharamshalas which have been erected on the premises over the past several decades to accommodate devotees.

It is believed that Maa Kali manifested to rid the world of two giants that were troubling the Gods residing in the vicinity. Lord Brahma referred the Gods to Parvati, the consort of Lord Shiva to deliver them from the clutches of these two demons. Parvati created Maa Kaushki Devi to get rid of the demons, but as the blood of the demons fell to the ground, many demons sprang forth. Goddess Kali manifested from the eve brows of Kaushki Devi and drank the blood of the demons that fell, thus preventing them from multiplying. Goddess Kali is thus portrayed as slaying the terrible demon Raktabija whose blood she prevented from dropping to the ground. Ever since, Maa Kali is worshipped as the Deity of the locality and her presence pervades the area with its divinity.

It is believed that Kalkaji Mandir is the oldest Kali Maa temple in the world and represents hope for all those who seek the Divine Mother’s blessings. Lord Krishna and the Pandavas are also said to have worshipped Goddess Kalika during the Mahabharata times and were blessed by Maa Kali. Shri Swayambhu Mahakaleshwar Shiv Mandir is also attached within the temple precincts, which greatly enhances the spirituality of the premises.

The temple complex is constructed of brick masonry, with marble stone decorating its façade. It is surrounded by a pyramidal tower and a doorway in each side, paved with marble, which is in turn surrounded by a verandah. There are 36 arched openings in the Parikrama and in the middle of this arcade, are two red sandstone tigers seated on a marble pedestal. Several inscriptions are in Urdu, nastaliq, and Hind, which indicates a mixture of various cultures. There is a stone image of Kali Maa standing between the tigers, with a trident of stone standing before it. Marble and brick pumice stone are used extensively in the temple structure along with plaster and masonry.

Hordes of devotees descend upon the Temple during religious occasions just to have a glimpse of Goddess Maa Kali. A huge fair is organized during the nine day Navratri, and the place frequented by devotees from across the length and breadth of the country. The entire temple complex is decked up with pomp and splendor for the duration of this period and the atmosphere around the temple displays a festive fervor, even during the night. Devotees come to witness the proceedings of bathing the idol (Mata Snanam) with milk followed by an Aarti every morning and evening. Taking part in this ritual is considered a great Tantric experience which many come to participate in, soaking up the spirituality which surrounds the ceremony. Religious Hymns in praise of the deity are also recited and devotees are driven into a religious frenzy in keeping with the spirit of the occasion.

Benefits or Blessings of the primary deity (Kalkaji Temple)

It is said that all those who seek the blessings of Maa Kali are never disappointed and she fulfills the wishes of all those who worship her. Considered the epitome of pure energy, she vanquishes evil forces that terrorize the righteous. Devotees come from far and wide to receive her blessings and she is ever willing to come to the assistance of those who call on her.

Location – How to reach Kalkaji Temple

The Kalkaji Mandir is located in the capital city of India, Delhi. The temple is situated on a hill and the area Kalkaji takes its name from this famous shrine. The shrine is located opposite Nehru Place business center and in the near vicinity of the famous Bahai Lotus temple.

By Flight:Delhi, being the capital city of India is well connected by regular flights to most major domestic and international destinations.

By Rail:Delhi is well linked by rail to all major cities of the country with trains plying frequently at regular intervals.

By Bus:There are regular buses plying from neighboring localities and towns to the city of Delhi.