Introduction about the Bankey Bihari Temple

The Bankey Bihari Mandir is a sacred Hindu Shrine dedicated to Lord Krishna, who is considered Lord Vishnu himself in mortal form. Located in the holy city of Vrindavan, in Mathura District, it is in close proximity to the Radhvallabh Ji Temple. This temple is among the Holiest and sacred temples of Lord Krishna in India and indeed the world itself. Many believe that the name Bankey implies ‘bent in three places’ and Bihari means the Supreme Enjoyer, but the name ‘Bankey Bihari’ also means ‘one who moves or dwells in the forest’. The image of Lord Krishna in the temple stands in the Tribhanga posture. It is widely perceived that The Lord appeared here in person with His divine consort and left behind a black charming image as a tribute to His staunch devotee Swami Haridas. The black colored Idol is so strikingly beautiful that one can forget their sorrows and sufferings by gazing into the limpid eyes of the image. It is no wonder then that the Shrine attracts visitors throughout the year from the four corners of the world.

History of the Bankey Bihari Temple 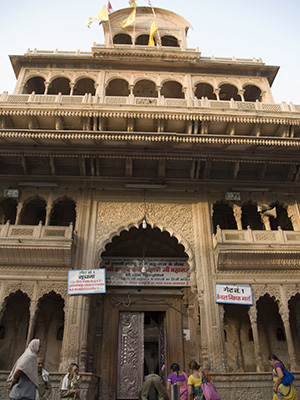 The Bankey Bihari Temple is believed to have been established by Swami Haridas and it is said that the Celestial Couple appeared in person and manifested here as an Image just to appease the devotee. The deity was then taken from Nidhivan and placed in a new temple constructed in 1862 AD. This new structure is an architectural marvel and pays tribute to the glory of the Lord with its magnificence and splendor. The Goswamis themselves are said to have contributed financially toward the construction of this temple.

Significance of the Bankey Bihari Temple

Swami Haridas wanted his beloved Lord to always be in front of his eyes and was granted his wish by the Divine couple who merged into one single black divine Idol of infinite beauty. This very Idol graces the temple even today. The beauty of the Idol is so enchanting that the Darshan in the temple is never continuous but interrupted several times by the curtain being drawn periodically. It is said that if one gazes long enough into the eyes of Shri Bankey Bihariji, the person would be dazzled by its charm and go into raptures of ecstasy, ultimately losing his self-consciousness. Another distinctive feature of this remarkable temple is that there is no tolling of bells, lest it awaken the Lord. Bells are not rung even during Aarti as it might disturb the slumber of the Lord.

Architecture of the Bankey Bihari Temple

The temple is a masterpiece of architecture, built in the contemporary Rajasthani style. The sheer beauty of this divine structure speaks volumes for the craftsmanship and skills of the builders. It also reflects on the hard work and effort that went into its making. The ambience prevailing within the premises is so sacrosanct, that one is spellbound by the religious and spiritual fervor of the shrine.

The temple celebrates several festive occasions with innumerable people from all over the world participating in the proceedings. The Seva is performed in three parts everyday-Shringar, Rajbhog and Shayan, with people thronging the shrine for a glimpse of their beloved Bankey Bihari. Mangala Aarti is performed only once a year on Janmaashtami. On the occasion of Akshaya Tritiya, which falls in April-May, devotees are treated to a glimpse of the Lotus feet of the Lord. On the autumn full moon day, the deity can be seen holding a flute and wearing a Mukut (Crown) and he can be seen in full view on the last five days of the month of Phalguna, during the Holi festival.

The deity is worshipped and looked after like a child and the services offered all resemble the love and affection we shower on a little one.

Janmaashtami and Holi are celebrated with great fervor and people flock to the temple in droves to take part in the celebrations.

Benefits or Blessings of the primary deity- Bankey Bihari Temple

The Darshan of the Lord is said to relieve one from sorrows and many devotees go into raptures of joy just by having a glimpse of the Deity. Bankey Bihari is a very popular Deity and represents the childish pranks of Lord Krishna. Lord Krishna as a child was fabled for his powers to offer protection and solace to all those who surrendered to Him and took refuge in His Lotus feet.

Location – How to reach the Bankey Bihari Temple

By Air: Agra is the nearest Airport to Vrindavan, located at a distance of approximately 67 kms. The nearest International Airport is Delhi.

A rail bus runs between Vrindavan and Mathura around 5 times a day.

By Road: Vrindavan is situated on Delhi-Agra highway and well connected by road to neighboring cities and towns. The temple is just 7 kms away from the highway and easily accessible by bus.

Local Transport: Local buses, tempos and three wheelers are available to take one to the temple. One can also catch a taxi to reach the temple.