The Baijnath temple is a revered Hindu shrine located in the scenic Indian state of Himachal Pradesh. The temple is situated close to Palampur in the Beas valley and dedicated to Lord Shiva, one of the three Gods in the holy trinity of Hinduism. Shiva is represented here in the phallic from of a ‘Lingam’ and commemorated as Vaidyanath, the Lord of the physicians. The temple complex also houses numerous other shrines of various Hindu deities.

The image of Shiva enshrined here is considered to be ‘Swayambhu’, which means self-manifested. The temple is considered as a part of Indian heritage and deemed a protected monument by the Archaeological Survey of India. Stringent security arrangements have been made to protect the monument and keep it safe from anti-social elements. It is also a very popular pilgrim and tourist center which attracts visitors from all over the world. 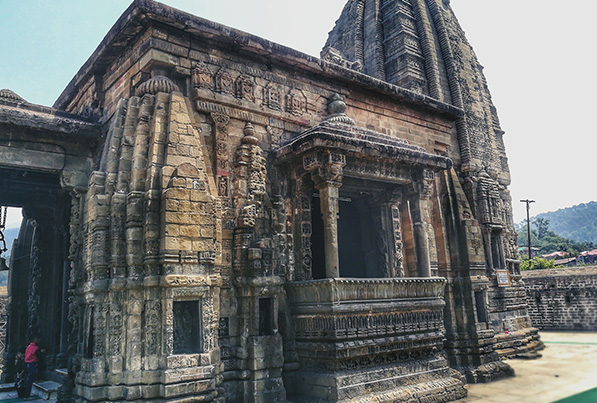 Inscriptions on the walls of the Baijnath Mandir attribute the construction of the shrine to two native merchants named Ahuka and Manyuka in 1204 A.D and worship has been carried out ever since then. The inscriptions on the porch of the temple state that there was a shrine dedicated to Lord Shiva at the same spot. The worship and rituals conducted in the temple are under the aegis of a local board at Baijnath with SDM as its chairman.

The temple was originally known as Kirangama and later changed to Baijnath after it was dedicated to Lord Shiva. The shrine also houses deities of Goddess Chamunda, Surya the Sun God , Kartikeya (son of Lord Shiva) and an enormous structure of Nandi, the Bull placed in front of the temple. It is also said that one of the 12 Jyotirlingas of Lord Shiva is placed in the Sanctum of this shrine. Ravana, the king of Lanka is also said to have worshipped Lord Shiva in this temple. The entire temple complex is surrounded by lush green gardens, which gives it a serene and peaceful ambience.

The temple is constructed in the early medieval North Indian style of architecture, commonly referred to as ‘Nagara’ style. It has also imbibed elements of Orissan style which is quite unusual in the state of Himachal Pradesh. The entry to the temple is via a vestibule that has a large Mandap in the center flanked by two huge balconies on either side. Numerous alcoves with images of Hindu Gods and Goddesses are found on the exterior walls. Provision has been made for fortifications with space for two entrances in the north and the south. A small porch placed on four columns is found just before the Mandapa and a massive image of Nandi, the Bull has been placed here.

Prayer services are held every day in the morning and evening on all occasions and festive seasons. The temple also celebrates special occasions like Makara Sankranti , Maha Shivratri , Vaisakha Sankranti, Shravana Mondays and many more. The occasion of Maha Shivratri is celebrated every year with a gala five-day state level function.

All festivals are celebrated with great enthusiasm and the temple vibrates with a religious and spiritual fervor during these occasions. A large number of tourists and pilgrims throng to the temple throughout the year and during festivals, the number of visitors goes up manifold.

Devotees to Baijnath revere Shiva as the divine physician and it is believed that those who are blessed with the Lord’s mercy are cured from ailments and diseases. Those who pray to the Lord with faith and devotion are never disappointed. The water in the temple is also said to contain medicinal and curative properties. The spiritual and auspicious nature of the place is mesmerizing and draws devotees to the temple like a spiritual magnet.

The revered Baijnath shrine is located at a distance of 16 km from Palampur in the Beas valley. It is accessible by various modes of transport.

By Air: The nearest Airport is located in Dharamshala, about 44 km away.

By Train: The Paprola Railway Station in Baijnath is about 2 km away.

By Bus: Several buses operate from neighboring cities and towns of Baijnath to reach the temple.