Amarnath cave is a famous Hindu shrine, which contains the Shiva Linga formed due to melting of ice from the roof of the cave onto the floor. The cave is situated at a height of 3,888 m and is 141 km from Srinagar, the capital of Jammu and Kashmir. The cave which is surrounded by snowy mountains on all sides holds an important part in the Hindu religious system and is considered as one of the holiest shrines of Lord Shiva. 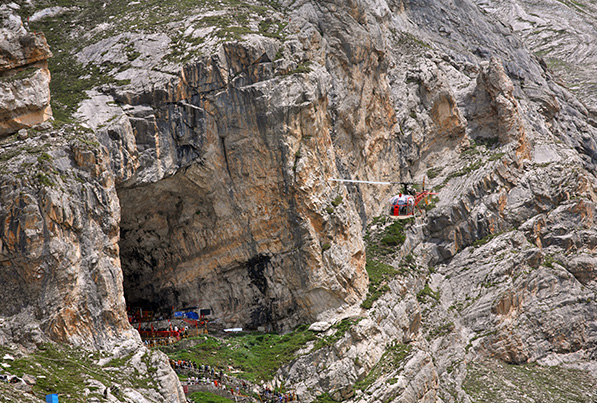 The cave gets its significance from the Shiva Lingam formed at a height of 40 m inside the cave. Although science states it as a stalagmite, formed due to dripping of ice from the ceiling of the cave, Hindus firmly believe that it is Lord Shiva’s presence in the form of a Lingam. It is also believed that the Lingam grows and shrinks as per the phase of the Moon, although there is no scientific proof for the same. Two other ice formations are found in the cave, which are believed to be Goddess Parvati and Lord Ganesha.

History and Mythology behind Amarnath Temple

There is a mention of Amareshwar or Amarnath Temple in the book “Rajatarangini”. There is a belief that Queen Suryamathi gifted trishuls, banalingas and sacred emblems to this Temple in the 11th century AD. It is also believed that a shepherd rediscovered the cave in the 15th century, when its presence was disremembered.

According to a Hindu legend, when Lord Shiva decided to leave Mount Kailash for deep meditation, he left his belongings at various places. He left Nandi (his Bull vehicle) at Pahalgam, Moon from his hair at Chandanwari, snakes on the banks of Lake Sheshnag. He left his son Lord Ganesha at Mahagunas Parvat (Mahaganesh Mountain).

He also left five elements of Nature – Earth, Water, Air, Fire and Sky at Panjtarni. As a symbol of sacrificing his belongings, Lord Shiva performed the Tandava Dance. Finally, Lord Shiva entered the Holy Amarnath Cave along with Goddess Parvati to reveal her the secret of life and eternity.

Every year, pilgrims from around the country visit the Amarnath Cave, during the 45-day season of July–August. There are several routes to reach the temple. One of the most chosen routes begins from Pahaalgam on foot to reach the cave which is 42 km (26 miles) to cover the journey in four to five days. There are two other routes, the longer and more traditional path from Srinagar, and the shorter route from the town of Baltal, which is 14 km. Elder devotees ride on horses to reach the cave. Worshipping Lord Amarnath showers you with plentiful health, protection, righteous living, spiritual growth and long life.

How to reach Amarnath Temple?

By Air: The nearest airport to Amarnath is Srinagar airport. From Srinagar, you can reach Pahalgam by private and shared taxis. From there, you can reach Amarnath by helicopter, on foot, or by pony rides.

You can also avail Helicopter services to reach Amarnath Dham, as it saves a lot of time and energy. There are only three helicopter operators for Amarnath Yatra namely, Pawan Hans, Global Vectra HeliCorp and Himalayan Heli Services.

By Train: There are no direct trains to Amarnath. The nearest station is Jammu, at a distance of 178 kms from Amarnath. From Jammu, one can hire cabs to reach either Baltal or Pahalgam. From Baltal, it is a 1-2 day trek (15 km) to reach Amarnath. However, the Pahalgam route is relatively longer and takes around 3-5 days (36-48 km).

By Road: Amarnath is not well connected by roadways. One should travel to Jammu, then Srinagar and then reach Baltal or Pahalgam by road. Baltal is the shortest but slightly difficult trek for 2 days. Pahalgam is the longest yet safer trek to Amarnath, which takes around 3 to 5 days. This route is preferred for families and older people. One can also hire ponies and palkies to cross the terrain