The Kalighat Temple in West Bengal, India is dedicated to the Hindu Goddess Kali. It was located on the banks of the River Hooghly, but the waters have receded and taken a new course. The temple, now stands on the banks of a small canal which connects to the Hooghly. This shrine is considered as one of the Shakti Peethas of India and represents the spot where the toes of the right foot of Goddess Sati fell. The city of Calcutta takes its name from this shrine, and it was only recently that the name was changed to ‘Kolkata’. The worship conducted in the temple was carried out by a Monk named Chowranga Giri, and the present day area of Chowringee is believed to have been named after him. The Temple is world famous and an important pilgrimage center for Hindus, drawing devotees from across the Globe to seek the Deity’s blessings. 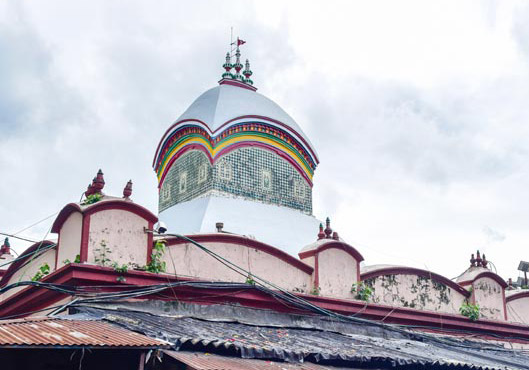 Though the temple at present if believed to about 200 years old, it finds mention in 15th and 17th century Hindu religious texts. Evidence has been found linking the origin of the temple to ancient days, with many traces indicating it may have been associated with the Gupta rulers. The temple was initially a small hut and the present day structure was erected by Santosh Roy Choudhury in 1799. It was subsequently completed by his grandson Rajiblochon Roy Choudhury in 1809. The Halder family of Kalighat was conferred with the honor of conducting the worship and in the 1960’s the Supreme Court appointed a committee to look after the affairs of the temple with due representation from the Government.

When Goddess Sati burnt herself alive in the sacrificial fire, Lord Shiva was enraged and placing the body of Sati on his shoulder, he commenced the Tandava dance. This terrified all the deities in Heaven and they urged Lord Vishnu to intervene. Using his discus, Vishnu cut Sati’s body into several pieces and the pieces fell to Earth. The place where the toes of the right foot of Sati fell is believed to be the site where the Kalighat temple is currently located.

The present image of Goddess Kali is made of touchstone and created based on the design of the idol of Mata Bhubaneshwari. This unique Idol features three huge eyes, a long protruding tongue made of gold and four arms which are made out of gold too. Two hands are depicted wielding a scimitar and a severed head of the asura king ‘Shumbha’. The head and scimitar represent human ego and divine knowledge, both of which are deemed necessary to attain Moksha or liberation. Her other two arms confer blessings on visitors, indicating her desire to guide devotees who pray to her sincerely.

The temple features a bathing ghat known as Jor-Bangla and the rituals being performed inside the Sanctum Sanctorum are clearly visible from the Natmondir through this vantage point.

There are two spots located adjacent to the Natmondir known as Harkath Tala which is meant for sacrifices to be conducted.

There is also a sacred tank located outside the boundary walls whose water is said to be that of the Holy Ganga. This spot is popularly referred to as Kaku-Kunda.

The temple complex also houses a shrine dedicated to Radha-Krishna and this is popularly known as Shamo-Ray temple.

The temple is reputed for its distinct Bengali style of architecture which is unique to this part of the country. There is an altar with three stones representing the Goddesses Shashthi, Sitala and Mangal Chandi and this sacred spot is known as Monosha Thala. All the priests are females and no worship or offering of food is done here.

The Kali temple is famous for the Snan Yatra when the priests bathe the Goddess with their eyes blind folded. Kali Puja is also conducted on Deepavali with great gusto and fervor. This Puja is observed on the moon day of the Hindu month Ashwin. Besides that, Durga Puja is performed with great fanfare in the temple and this is the biggest festival of the year. All festivals and Pujas conducted in the temple attract large numbers of devotees from across the country and the whole world as well. Festival time in the temple is a joyous occasion and the entire area comes alive during these occasions.

Benefits or Blessings of the primary deity- Kalighat Kali Temple

The water in the tank within the temple premises is considered sacred and believed to be that of the holy River Ganga. The water is said to originate from a subterranean reservoir linked with the Ganges. Bathing in the tank before Darshan of the deity is said to bestow one with progeny. Many childless couples congregate here to seek the blessings of the Divine Mother.

Location – How to reach the Kalighat Kali Temple

The city of Kolkata is well linked with other major cities of the country by Air, Rail and Bus.

By Air: The Kolkata Airport is located approximately 24 kms away from the temple.

By Rail: The Kolkata Railway Station is about 8 kms away from the temple.

By Road: Kolkata is well linked with neighboring town and cities by bus service.

By Metro: Kolkata has an efficient metro rail network linking most major points of the city.

Local Transport: Taxis and buses are available to take one to the Temple from various points in the city.