Sukra, known as Venus, is the sixth among the Navagrahas, the nine planets. The word Sukra in Sanskrit means ‘lucid, clear and bright’, and as such Sukra is the brightest planet. Venus has feminine energy. Goddess Lakshmi is the presiding deity. The signs Taurus and Libra, the second and seventh in the natal chart are ruled by Venus. He is the lord of the stars Bharani, PurvaPhalguni and Purvashadha

Areas of life attributed to Venus are material pleasure, affection to family members, intimacy, ornaments, luxury, comfort, vehicles, sensual satisfaction, passions, tendency to enjoy pleasure, vitality, affluence, appearance, artistic talents and fine arts. Venus is an embodiment of love and beauty. Sukra is an indicator of matters relating to spouse and partners. Reproductive system, face, throat and kidney in a physical body is controlled by Venus.

According to Hindu mythology, Shukra is the son of Sage Bhrigu. Sukra is the guru of Asuras, the demons and is also referred as Shukracharya. There is also another version that Venus, the master and teacher of Demons (Asura Guru), resided and meditated inside the stomach of Lord Shiva for 1000 years. Then Lord Shiva ejected Venus into the world as a live being. 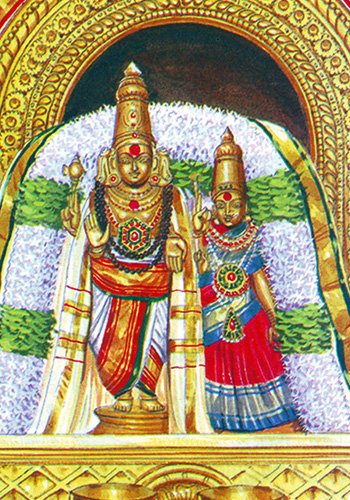 He was granted the status of a planet, because he stayed inside Lord Shiva’s physical body for many years. Sukra is portrayed with four hands and seated on a white lotus. He holds a stick, beads, lotus. Sometimes, He is portrayed holding bow and arrow and standing with a white horse.

If Sukra is strongly placed, it can provide wealth, luxuries, worldly pleasures, gains, favor of luck, peace of mind, strong intellect, higher position and expertise in art and music and a very good love and marital life, inherent sense of beauty, harmony, devotion and sensitivity.

On the other hand if it is weakly placed, then there could be many problems in career and profession, bad luck, loss of reputation, loss due to speculation and investments, indiscipline, self-indulgence, vanity, exhaustion. It can also cause health issues like indigestion, loss of apetite, skin rashes and pimples.

Propitiating Lord Sukra on Fridays is the effective way to get the blessings. The temple dedicated to Venus in known as Kanjanoor, in the southern part of Tamil Nadu. The gemstone attributed to Venus is Diamond. It is most appropriate to worship Sukra with white lotus, jasmine and white scented flowers. Field bean / leema bean (Mochai) is the favorite offering for Venus. 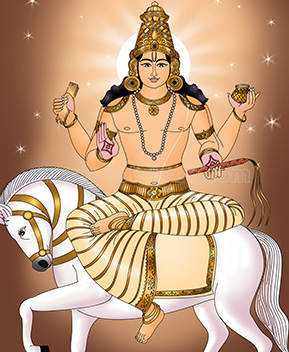 Participate in Venus Pooja to improve your finance, love and relationships.