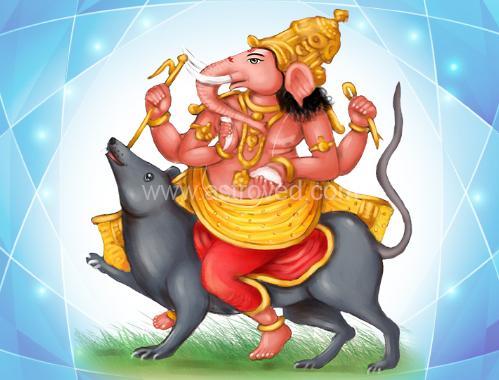 Vijaya Ganapati is regarded as the 14th among the 32 different forms of Ganapati. The word ‘Vijaya’ means ‘victory.’ Hence, Vijaya Ganapati is the ‘lord of victory’ or the ‘victorious lord.’ He is red in complexion and is seated comfortably on his usual mount Mooshika (rat). The mouse here is depicted as proportionate to the Lord himself in size and is actually seen trotting along quite fast, balancing the Lord on its back with consummate ease. Vijaya Ganapati has four hands and holds in the principal right hand, his favorite fruit mango, which is a golden color. He has in his other three hands, his own broken tusk, a noose, and an elephant goad.

The sculptures showing this form of Ganesha can also be found in some temples in Mysore region, where all the 32 Ganapati forms are on display. Vijaya Ganapati can also be worshipped in an idol form, in the famous Ashtavinayak temples in Pune, in the state of Maharashtra. This form of Ganesha can be seen as a painting in the Kerala capital Thiruvananthapuram and also in the Pazhavangadi Ganesha temple there.

Star Ayilyam, also known as Aslesha Nakshatra is said to be related to this aspect of Ganapati.

Vijaya Ganapati is the God of achievement and success. It is hence believed that praying to him shall clear impediments immediately, provide relief from difficulties, ensure success in endeavors and make people victorious.

The mantra, which reads as under in Sanskrit, hails him as ‘Lord Ganapati, the victorious,’ describes his graceful form and prays for his kindness and blessings.

Chanting the Vijaya Ganapati mantra with faith can be an effective means of propitiating the powerful Lord.