Sage Vasishtha is one of the Saptarishis, seven stars of the constellation. The word Vasishtha denotes unparalleled brightness. According to his name, he has conquered all the negative qualities like desire, anger, miserliness, jealousy, and pride. He was considered as the teacher of Lord Rama and King Harischandra. He was one of the authors of “Rig Veda”, the ancient and important among the Hindu pantheon. He was regarded as the first saint in the school of Vedanta established by Sage Adi Shankara.

Birth and Life of Sage Vasishtha: 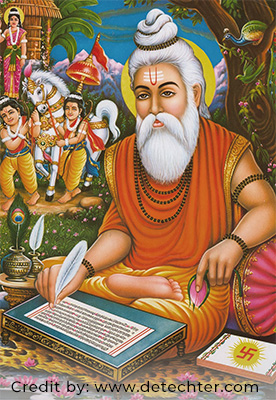 Sage Vasishtha was born to MitraVaruṇa and Urvasi. According to Vedas, Sage Vasishtha was one of the Manasaputras of Lord Brahma. He was created by Lord Brahma to establish the path of enlightenment and knowledge to the people of the earth. He had divine cows Kamadenu and her daughter Nandini, which grants enormous boons, and gives an unlimited supply of milk. He is a prominent person, who was present in both the Ramayana and Mahabharatha period.

Sage Shakti is the son of Sage Vasishtha. It is believed that along with Sage Shakti all his siblings were killed by a king. When the king was travelling, he did not move aside, even after seeing the saint in on the way. His vanity brought him a severe curse to become a demon. Out of anger, he killed Sage Shakti and several other siblings. He quickly realized his foolishness out of anger and regretted it. When the king realized his mistake, he sought an apology from the sage. Being highly benevolent, the Sage immediately apologized and granted his redemption.

The conflict between Sage Vasishtha and King Vishwamitra was an epic piece of history. Once when the king passes the hermitage, he was well received and greeted by the sage. The sage was able to feed the mammoth army with great food and beverages. On seeing that, a sage of a small hermitage was able to satiate the hunger of an army, he enquired the reason and found that it was “Nandini”, the divine cow. The king wanted to take the divine cow under his possession and fought with the sage. Through the special powers of the cow, the hermitage and Sage Vasishtha were saved. Once King Vishwamitra wanted to be a great sage like Sage Vasishtha. After several attempts, he failed. Then he realized that it was his ego which prevented him to be the sage. Thus after shedding the ego, he too became a great sage like Vasishtha.

He has contributed Yogavashishta Maharamayana, Vashishta Dharmasutra towards knowledge and religion. He is highly well-versed in astrology and rendered Vashishta Purana, Vashishta Saddhakalp, Vashishta Shiksha, Vashishta Tantra. His work "Vashistha Samhita” speaks about the Vedic system of astrology.He was a great hermit on the banks of River Saraswathy. He accommodated a lot of men, animals in his hermitage which was flooded with knowledge and compassion towards all human beings. He has elaborated on the topics of human nature, spiritual liberation, and the nature of life.

Sage Vashishta emphasized that it is important to have both divine and individual efforts, to achieve anything in this world. He considered the habit of laziness is a disease which brings unhappiness. Thus through the compassion, knowledge and divine forces, the path led by the great saints are the virtuous path for today’s humanity.