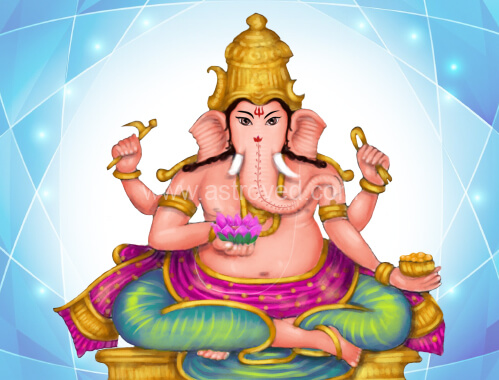 Vara Ganapati is regarded as the 18th among the 32 different forms of Ganapati. The word ‘Varam’ or ‘Vara’ means ‘a boon’ or ‘boons.’ Vara Ganapati thus happens to be ‘the Lord who gives boons’ or simply, ‘a boon-giver.’ Vara Ganapati is a rare form, as he is seen with his consort Shakti, also known as Pushti Devi, seated on his left lap, and holding a flag and a lotus. This Ganapati is red in complexion, and just like his father Lord Shiva, has three eyes and a crescent moon in his crown. He also has four hands. While his main left hand goes around his spouse’s waist, the other three hands are holding a dish made of honey, a noose and an Ankusa (elephant goad), in them. His trunk is curled to the right and holds a Ratna Kumbha (pot full of jewels).

This form of Ganesha can be seen as a painting in the Kerala capital Thiruvananthapuram and as a sculpture in some temples in Mysore region, where all the 32 Ganapati forms are on display. This Ganapati can be worshipped in an idol form too, in the Shri Renuka Yellamma Devi Temple in Saundatti/Savadatti in Belgaum, in the state of Karnataka. There is also a belief among some that this pilgrimage would be complete only after a visit to the Lord Anjaneya temple, Nanganallur in Chennai.

Hasta Nakshatra or star is said to be related to Vara Ganapati.

Vara Ganapati is a symbol of generosity. His devotees hence believe that it is easy to propitiate this Lord and get all their true wishes fulfilled.

The mantra, which reads as under in Sanskrit, terms him as ‘delightful Ganapati’, describes his appearance in detail, and prays for his grace and blessings.

Chanting the Vara Ganapati mantra with faith, can be an effective means of propitiating the powerful Lord.