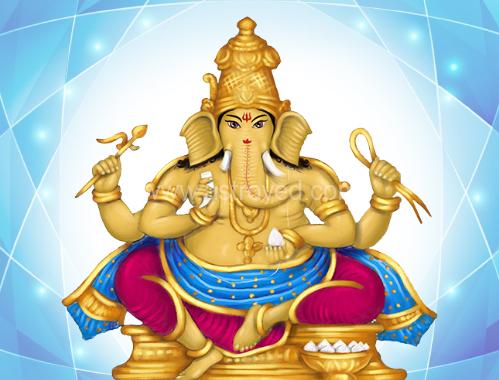 Tryakshara Ganapati is regarded as the 19th among the 32 different forms of Ganapati. ‘Tryakshara’ is a combination of two words, ‘Thry’ or ‘Thray’ and ‘Akshara.’ ‘Thry’ denotes number 3 and ‘Akshara’ means letters. ‘Try Akshara’ thus indicates a three-letter word and represents the primordial sound ‘Om.’ The sacred sound Om is actually made up of three letters A, U, and M and hence is indicated here as ‘Tryakshara.’ Tryakshara Ganapati is thus, ‘the Lord of the sacred Om.’ He is golden yellow in complexion, has a third eye in his forehead and possesses four hands, which hold in them, his own broken tusk, the elephant goad, a noose and mango fruit. He also has big, flabby ears, with a fly whisk; his trunk is curled to the left and holds Modak, his favorite dumpling.

This form of Ganesha can be seen as a painting in the Kerala capital Thiruvananthapuram and as a sculpture in some temples in Mysore region, where all the 32 Ganapati forms are on display. This Ganapati form can be worshipped in an idol form too, in the Tirumakudalu temple in Narasipura, in the state of Karnataka.

Chitra Nakshatra or Chittirai Star is said to be related to Tryakshara Ganapati.

Tryakshara Ganapati is a benevolent Lord, who represents the primordial sound ‘Om.’ This Ganapati is regarded as the Lord who can bestow people with concentration in education and progress in career. By meditating on him and praying to him with sincerity, people can get sound spiritual knowledge and can move in the path of self-realization.

The mantra, which reads as under in Sanskrit, describes the appearance of this elephant-faced Lord in detail, and prays for his grace and blessings.

Chanting the Tryakshara Ganapati mantra with faith, can be an effective means of propitiating the powerful Lord.