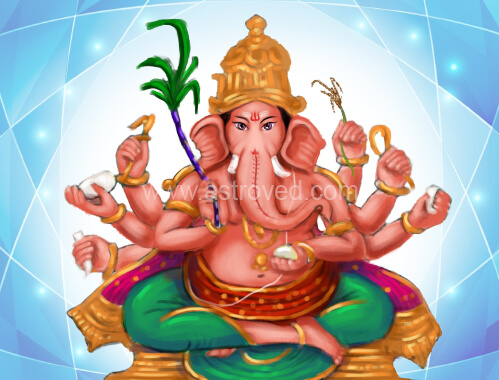 Taruna Ganapati is regarded as the 2nd among the 32 different forms of Ganapati. ‘Taruna’ refers to the one who is youthful. Taruna Ganapati is thus an adolescent form of Lord Ganesha, who is young in appearance. He is shining brilliant like a mid-day Sun, and his bright red complexion is said to denote the blossoming of freshness and youth in the living beings. He has a compassionate face and possesses eight hands. While he holds his broken tusk, an elephant goad, a sugarcane stalk and a rose apple fruit in his right hands; his left ones carry, a noose, his favorite Modak (dumpling), a wood apple fruit and a sprig of paddy.

This form of Ganesha can be seen as a painting in the Pazhavangadi Ganapati Temple in the Kerala capital Thiruvananthapuram and as a sculpture in some temples in Mysore region, where all the 32 Ganapati forms are on display. Taruna Ganapati can also be worshipped in an idol form in the famous Mahakaleshwar temple at Ujjain, in Madhya Pradesh.

Taruna Ganapati is an exuberant form of Lord Ganesha and is regarded to be representing the primordial element Vayu, the air. Devotees offer special worship to him, especially on the sacred occasions like Sankashti Chaturthi (4th waning Moon), Ganesha Chaturthi and Durva Ganapati Vrat (fasting). It is believed that worshipping this Lord would remove the obstacles, solve life problems and bestow with sound health, abundant happiness, and joyful life.

The mantra, which reads as under in Sanskrit, describes the appearance of this young Ganapati, who ‘shines vividly with his brilliant youthfulness,’ and prays for his blessings and grace.

Chanting the Taruna Ganapati mantra with faith can be an effective means of propitiating this youthful Lord.