Sage Sushruta is one of the renowned Saints, whose contributions towards Surgery was highly revered even now. He is revered as “Father of Plastic Surgery”, as he invented and developed various surgical procedures. His work is “Sushruta Samhita”, is one among the oldest Trilogy on medicine. It is interesting to note that his birth name is unknown, but the word Sushruta refers to renowned. Many people associate with the period of Mahabharatha, where he cured many soldiers, who suffered out of chronic diseases. Many people also propose an idea, that there could be several Sushrutas and not just one Sushrutha who rendered a lot towards Science, Ayurveda, and Surgery.

His contributions are tremendous, and he advocated dissecting a cadaver, to teach his students about the anatomy of the human body. It is also believed that is is a descendent or from the Lineage of Lord Brahma. Many people also suggest that he gained his knowledge through immense practices, and his devotion and perseverance to serve humanity. He also performed severe austerity and gained the blessings of the Lord Dhanvantari , the divine doctor. 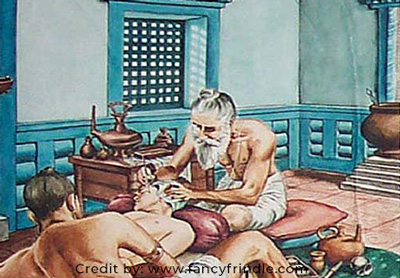 Ayurvedic Medicine dates back to the Vedic period, which is before 5000 years. The word Ayurveda refers to “life science” which has the practice of comprehensive healing of mind, and body, which combines the science of herbs with great spiritual practices.

His contributions towards science and Ayurveda is tremendous, where lived along the shores of Ganges, and helped many people during his time. It is very interesting to note that his guru was Sage Divodasa, to whom, the Lord Danvatri, the epitome of cure and medicine has passed his knowledge.

Plastic surgery was practiced even before the period of Sage Sushrutha, but it was only the Sage who brought a lot of changes and patronized. He made significant development to the system and enhanced many procedures. His specialty is “Rhinoplasty”, reconstruction of the nose. He used wine to intoxicate the patience, in the place of Anesthesia and then proceed with the operations.

He had many disciples, to whom he taught the system of medicine and surgery. Under him, there were numerous medical practitioners, who learned the art of medicine. He rendered “Sushruta Samhita”, a well-developed book on various techniques, and procedures of surgery. He found various herbs and devised special concoction, which could treat the patients. Apart from Rhinoplasty, he also performed hernia surgery, the caesarian operation for childbirth, prostate removal, extraction of a tooth, removal of the cataract, and treatment of wounds and internal bleeding.

Further, he analyzed various eye diseases and prescribed eye and ear drops. He established the school of embryology and developed prosthetic limbs. He was also well-versed in advanced knowledge of the human body through dissection.

The great saint and healer Sage Sushrutha laid the foundations for the surgery, where the whole world could gain their knowledge upon. His works are translated into many languages, where the entire world is conducting extensive research on his works.