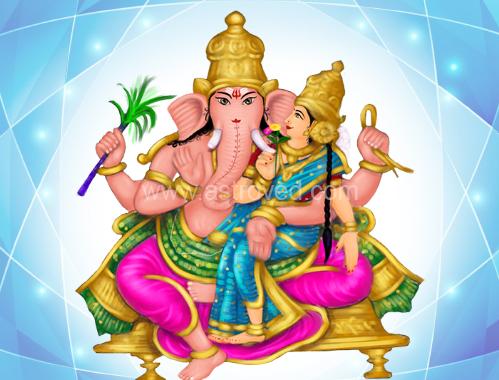 He appears with his consort Shakti Devi sitting on his left lap, as he is seated on a red lotus. The Lord is luminous like sunshine, is attired in blue and has four hands. He holds the boon-giving varada mudra posture in his main right-hand while the left one fondly embraces his consort, while also holding in it a vessel containing kheer or payasam (sweet offering), the milk pudding. His other hands carry the elephant goad and the noose. The Goddess is dressed in green and holds a lotus flower in her hand.

It is in the Sri Naganathaswamy temple in Thirunageswaram near Kumbakonam in Tamil Nadu that we can worship Sankashta Ganapati in his idol form. The star Revati Nakshatra is said to be related to this Lord.

Sankashta Ganapati worship, it is believed can remove misery and distress from the lives of the devotees and fill them with satisfaction and joy.

This is the Sankashta Ganapati mantra, which describes his form in good detail and seeks his protection. The devotees believe that the recitation of this hymn with faith can earn for them the Lord’s blessings and bestow them with many benefits.