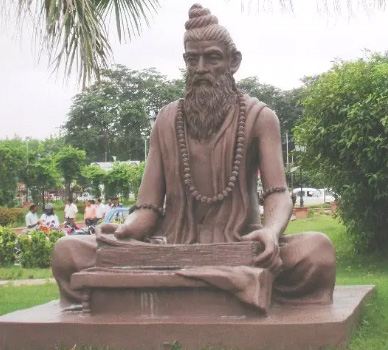 Sage Patanjali is a great yogi of Tamil Saiva Siddhanta tradition. He is one of the great “Siddhar” and is revered as one among the great saints who rendered a lot towards the art of Yoga. He has rendered Yoga Sutra, one of the greatest work on Yoga. It is also believed that Patanjali may not be the same person, and there could be several Patanjalis in the course of Indian History. One among them wrote the commentary on the Panini’s Ashtadhyayi.

He is considered as the incarnation of Ananta and Sesha the serpent, which has a thousand heads and is considered as the leader of the serpent race. Legends suggest that since he wanted to learn the art of dance after he saw the cosmic dancer did his stellar performance. He meditated towards Lord Shiva to give him a new birth, where he can learn the divine art. During his meditation, he was able to see a Yogini, Gonika who was also worshipping Lord Shiva for a child. Through his meditation, he understood that his mother in this birth would be Gonika. Lord Athisesha appeared in the form of a small human baby, coiled in her palms and requested her to accept him as her son. She named him Patanjali, where Anjali refers to “Prayers”, and Pat refers to have fallen from heaven. Thus the word Patanjali refers to the gift from heaven, which is the fruit of the meditation.

Listening to Lord Vishnu’s words, made Lord Adishesha get impressed in the Lord Shiva’s dance, and expressed his desire to learn dancing. Lord Vishnu then prophecized that soon Lord Shiva would bless Adishesha to pen an explanation on grammar, and learn the art of dance, and perfect the art. While Lord Vishnu told this, Adishesha was delighted and meditated towards Lord Shiva.

It was in Chidambaram, at Darukavanam, a garden, Lord Shiva wished to show all the Rishis a lesson for their haughtiness. Lord Shiva took a form of a beggar and could charm all the wives of the saints. Angered by the begger, the saints performed a big penance and sent a tiger. Lord Shiva tore the tiger apart, and word the skin against his waist. When they sent a snake, he wore it against his neck. On hearing this story, Lord Adishesha requested Lord Vishnu that he wanted to see the dance. Thus he was born as Sage Patanjali and lived in Chidambaram. Then, Lord Shiva along with his consort performed a special dance, which was witnessed by many Gods, demigods and saints.

Patanjali Yoga sutra is a great composition of Yoga, which led to the dawn of today’s yogic belief. His work Mahabashya is highly revered. He was one of those saints, who gave metaphysics as a Sanskrit grammar which was highly appreciated by the people. His work Patanjalatantra is a book on various herbs, which would help the body to gain positivity. Thus his works are always highly revered.

He has mastered “Ashtamaha Siddhis”, the special eight powers, which are invoked by special austerities. Many shrines have the idols of Sage Patanjali, which is believed to have metaphysical, and mystical powers. It is also believed that he is benevolent, and grants a lot of boons, for those who meditate towards him.