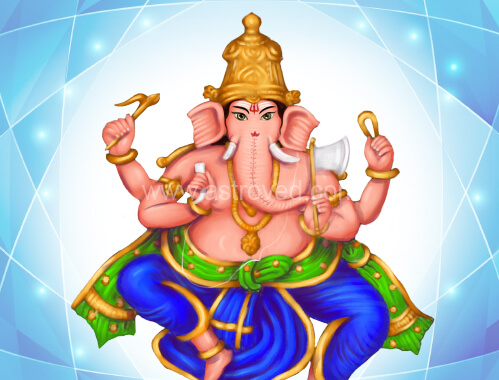 Nritya Ganapati is regarded as the 15th among the 32 different forms of Ganapati. The Sanskrit word ‘Nritya’ means ‘dance.’ Nritya Ganapati, as the name suggests, is a dancer or a happy dancer, and thus represents the relaxed and enjoyable form of the Lord. This Ganapati is depicted dancing under the divine, wish-fulfilling Kalpa Vriksha tree. With one foot placed on the ground and the other raised, as during a dance, he is shining in golden yellow color and has four hands. While he holds his own broken tusk in the principal right hand, an elephant goad, a battle axe, and a noose are there in his other hands. Rings are seen in his fingers and his trunk, curled in the end, is holding his favorite snack, Modak (dumpling). In some depictions, one of his hands is shown as holding the sweet meat.

This form of Ganesha can be seen as a painting in the Kerala capital Thiruvananthapuram and also as a sculpture in Pazhavangadi Ganesha temple there. The sculptures showing this form of Ganesha can also be found in some temples in Mysore region, where all the 32 Ganapati forms are on display. Nritya Ganapati can also be worshipped in an idol form, in the Magudeshwarar temple in Kodumudi near Karur town, in the state of Tamil Nadu.

Magham Star, also known as Magha Nakshatra is said to be related to this aspect of Ganapati.

Nritya Ganapati is a happy and kind-hearted aspect of the Lord. This dancer form also shows Ganapati as a connoisseur of fine arts. Hence his worship is believed to bestow the devotees with an aptitude for learning fine arts, proficiency in them, and also success and fame in that field. Hence this Lord is widely worshipped by artists, and especially by dancers.

The mantra, which reads as under in Sanskrit, sings the praise of this ‘dancing Lord,’ describes his appearance and prays for his blessings.

Chanting the Nritya Ganapati mantra with faith, can be an effective means of propitiating the powerful Lord.