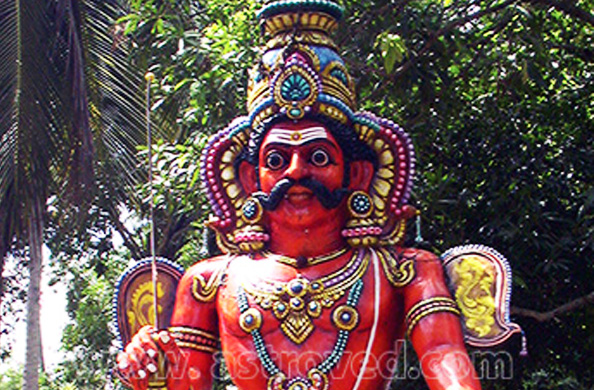 Muneeswaran is a deity considered as an aspect of Lord Shiva. His name is made up of two words ‘Muni’ and ‘Eswara,’ the former meaning ‘a saint or an ascetic’ and the latter denoting ‘Shiva.’ The name can thus be taken to mean, ‘the saintly form of Shiva.’

Muneeswaran is depicted as a robust man with a bright face, thick mustache, clad mostly in a simple, white, cotton dhoti, adorned with a headgear, jewels, and garlands, and holding the trident and mace in his two hands. He is also shown variously as standing, sitting or as the one riding a lion.

Muneeswaran’s importance lies in the fact that he is worshipped as a family deity for many generations, in several Shaivite families in the states of Tamil Nadu and Karnataka. He is also believed to symbolize knowledge, power, wisdom, and affection.

Many legends cover the story of Goddess Parvati, in whatever name she was born, marrying Lord Shiva.

One of them narrates the tale of Dakshayani when the Goddess was born as the daughter of Daksha, the divine entity. Also called Sati, she set her heart on Lord Shiva , right from her young age and was very determined to attain him as her husband. But, her father had an antipathy towards Shiva. Hence, while he arranged the Swayamvar, the groom-choosing function for the marriage of his daughter, he invited many but not Shiva. Still, Sati threw the ceremonial garland in the air praying for Shiva as her consort, and there it landed around the neck of Shiva. Left with no option, Daksha had to give Sati in marriage to Shiva, which he did, but then totally cut-off his relationship with them.

Later, Daksha performed the great Ashwamedha Yagna (horse sacrifice fire ritual), for which he invited all the Gods, but not Shiva. Still, Sati went for the ritual, with the very reluctant permission of Shiva. There, Daksha spoke disparagingly about Shiva and that deeply hurt Sati. Humiliated, she jumped into the sacrificial fire and immolated herself. Coming to know the tragedy, Shiva went wild in anger and sorrow and produced from his hair, the ferocious and massive form of Veerabhadra. Adorned with the garland of skulls and carrying terrible weapons, he marched to Daksha’s place along with the Shiva Ganas, the attendants, destroyed the sacrifice, chopped off Daksha’s head and slayed him, and also subdued and scattered the Gods. Here, the folklore adds that Shiva also created Muneeswaran to protect the good souls and that Muneeswaran performed his duty and saved the righteous ones. It is also said that Muneeswaran had seven qualities in him and in line with those, he got seven names for himself such as Shivamuni, Mahamuni, Tavamuni, Nadamuni, Jadamuni, Dharmamuni and Vazhamuni.

Muneeswaran is worshipped primarily in the South Indian states of Tamil Nadu and Karnataka, both as a peaceful God and also as a fierce one. People worship the kind form with flowers, fruits, and food items, while animal sacrifices are made for the aggressive form, in some places. However, Muneeswaran is regarded as a congenial God, who offers protection to his devotees.

Munesswaran is worshipped in villages with grand celebrations when different customs are performed, and goats or chicken are sacrificed for the god. He is also offered Beedis (country made cigarettes) or cigars and alcohol. Pal Muni, a form of Muneeswaran is considered as a vegetarian deity who does not accept any animal sacrifice.