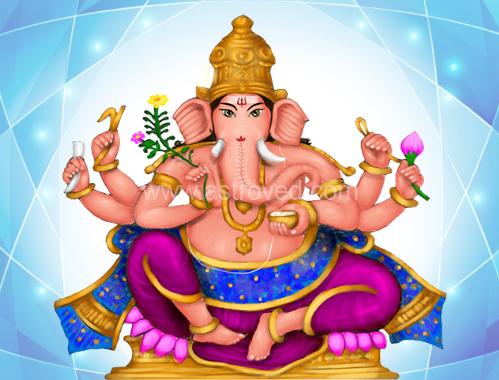 Kshipra Prasada Ganapati is regarded as the 20th among the 32 different forms of Ganapati. The word ‘Kshipra’ indicates quickness and immediacy, and ‘Prasada’ is blessing or boon, and here, can also mean action. As the name suggests, Kshipra Prasada Ganapati is regarded as the Lord who shall answer prayers, reward true devotion and punish the wrong-doing, all instantly. Having three eyes and also sporting the crescent Moon on his crown, this form has some attributes similar to those of his father, Lord Shiva. Kshipra Prasada Ganapati is crimson red in complexion, seated on a throne made of the sacred Kusha grass, has a big belly, indicating his having the entire universe within himself, possesses 6 hands and holds in them, his own broken tusk, a twig of the wish-fulfilling tree Kalpa Vriksha, an elephant goad, a noose, a white lotus and a pomegranate fruit.

This form of Ganesha can be seen as a painting in the Kerala capital Thiruvananthapuram and as a sculpture in some temples in Mysore region, where all the 32 Ganapati forms are on display. This Ganapati form can be worshipped in an idol form too, in the famous Karpaga Vinayakar temple in Pillayarpatti near Karaikudi, in the state of Tamil Nadu.

Swati Nakshatra or star is said to be related to Kshipra Prasada Ganapati.

Kshipra Prasada Ganapati is an immediate provider of benefits. Sincere prayers offered to him are believed to get for the devotees, prosperity, success, and peace. Also, meditating on him regularly would clear obstacles and help them in the path towards self-realization.

The mantra, which reads as under in Sanskrit, describes the appearance of this quick-reacting Lord and prays for his grace and blessings.

Chanting the Kshipra Prasada Ganapati mantra with faith, can be an effective means of propitiating the powerful Lord.