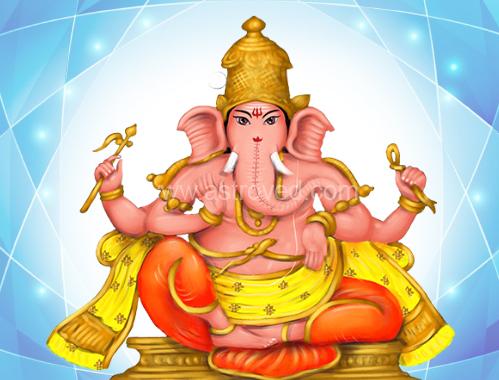 Lord Ganapati is regarded as the 17th among the 32 different forms of Ganapati. The word ‘Ekam’ or ‘Eka’ stands for the number, ‘one’ and ‘Akshara’ means ‘the letter.’ Eka Akshara thus indicates a single syllable and represents the Beejakshara, called ‘Gam,’ which is also known as the ‘seed letter.’ Ekakshara Ganapati is thus ‘the Lord of the single-letter’ and symbolizes this sacred, single syllable, Beejakshara Mantra, ‘Gam.’ He also denotes the primordial, universal sound, ‘Om.’ Ekakshara Ganapati sits in the majestic Padmasana posture (yogic lotus pose), and is generally depicted as riding his favorite mount, Mushika, the mouse. He is red in complexion, also covered with red silk, and has three eyes and a crescent moon in his crown, just like his father, Lord Shiva. He also has four hands. While his main left hand shows Varada Mudra, the boon granting posture, he holds a noose, an elephant goad and a pomegranate fruit in his other three hands.

This form of Ganesha can be seen as a painting in the Kerala capital Thiruvananthapuram and as a sculpture in some temples in Mysore region, where all the 32 Ganapati forms are on display. However, this Ganapati can be worshipped in an idol form, in the ancient temple in Hampi that lies near Hospet town in the state of Karnataka.

Uttiram Star, also known as Uttara Phalguni Nakshatra is said to be related to Ekakshara Ganapati.

Ekakshara Ganapati is a symbol of contemplation. It is hence believed that worshipping this meditative form of the Lord would help the devotees to have control over their minds and also the senses.

The mantra, which reads as under in Sanskrit, calls him as ’the Ganapati identified with the word Om,’ describes his appearance, and prays for his grace and blessings.

Chanting the Ekakshara Ganapati mantra with faith can be an effective means of propitiating the powerful Lord.