Introduction about the Hampi Temples

Hampi is an ancient village and temple town located in the Southern Indian state of Karnataka. The site is situated within the ruins of the historic Vijaynagara city, the capital of the once mighty Vijayanagara Empire. Home to several temples and ruins of a long bygone era, Hampi is a very important religious center, housing renowned shrines like the Virupaksha temple and several other monuments. The town is designated as a UNESCO World Heritage Site and many organizations around the world are involved in the conservation and preservation of Hampi’s heritage and ruins. Hampi is regarded as one of the most beautiful and culturally rich centers in Karnataka, with The Archaeological Survey of India also conducting numerous excavations in the area. It is also an important pilgrimage center for both Hindus and Jains, attracting scores of visitors from across the wide expanse of the world. 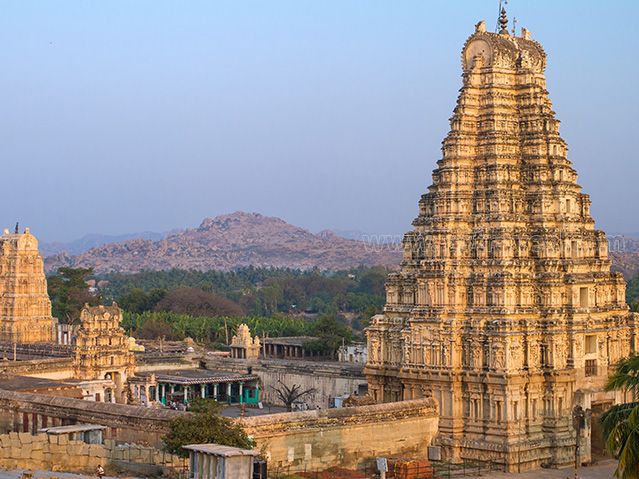 History of the Hampi Temples

The town was reportedly a part of the Maurya Empire during the 3rd century BC, according to the Edicts of Emperor Ashoka found in Bellary district. Archeologists have also recovered a Brahmi inscription and terracotta seal dating back to the 2nd century CE from the site. The first settlements are also believed to have been made from 1 CE. Before the rise of the Vijayanagara kings, the area was probably in the hands of some local chieftains. Hampi served as the capital of the Vijayanagara Empire from 1343 to 1565, around which time it was besieged by hostile Muslim invaders.

Significance of the Hampi Temples

Hampi is spread over an area of about 26 kms and a treasure trove of open-air temples, reminiscent of an alfresco museum. The rugged setting further enhances the ambience, making it truly unique and distinctive. The renowned Virpuksha and Vitthala temples are a part of this cultural legacy and add to the mystique of Hampi. A significant historic and architectural site, the landscape around the town proliferates with large stones which have been used to carve statues of Jain deities. There is also an Islamic quarter which used to house high-ranking Muslim military officers and several officials of the king’s court.

Architecture of the Hampi Temples

The area around Hampi abounds with several monolithic sculptures and spectacular monuments. The magnificent temples are well-designed and built in the Hindu style of architecture. Several lines of fortifications encircle the town, which also features many bastions and gateways. Several Jain temples are found on the Hemakuta hill, along with two Devi temples and some structures in the Virpupaksha temple dating back to as early as the Chalukyan period in the ninth and tenth century AD. The town houses various Hindu temples, some of which are still used for worship. Some of the noteworthy structures are mentioned below:

The Badavi Lingam houses the largest Linga image in Hampi and the image of Shiva is depicted with three eyes. A water channel also flows through the Sanctum.

The Malyavanta Raghunathaswamy temple is an ancient shrine and its walls are decorated with motifs of marine creatures.

The Hazara Rama Temple Complex is in ruins, but the elaborate frescoes are still well-preserved. A sprawling courtyard with beautiful gardens is the highlight of this shrine. Carvings and inscriptions depicting scenes from the Ramayana are a notable feature of this structure.

The Krishna temple was built in 1513 AD and features a Sacred Tank or Pushkarani. It is an ASI protected monument and currently not used for worship.

The Vittala Temple Complex is one of the more prominent shrines of Hampi and features a stone chariot which is the celebrated symbol of the Karnataka Tourism Board. It also features a magnificent swing pavilion and the famous musical pillars.

The Prasanna Virupaksha Temple was completely covered before it was discovered and excavated. It is also referred to as the underground Shiva temple.

The Jain temples in Hampi include Hemkut Jain temples, Ratnantraykut, Parsvanath Charan and Ganigatti Jain temples, which date back to the 14th century. Unfortunately, most of the idols in the temples are missing.

Besides these shrines, Hampi also houses the Achyutaraya temple, the Chandramauleshwara Temple, the mantaps of Vittala temple, the Preksha temple, Saasivekaalu Ganesha temple and the Yantrodharaka Anjaneya temple. A Muslim Sunni Masjid is also featured in this famous city of ruins.

Location – How to reach the Hampi Temples

The town of Hampi is a much visited tourist spot and renowned worldwide. It is 353 km from Bengaluru and 74 km from Hospet.

By Air: Hubli is the nearest Airport and around 163 km away.

By Train: The nearest Railway Station is around 10 km away in Kariganuru.

Rental cars and taxis are available to take one to Hampi from these points.