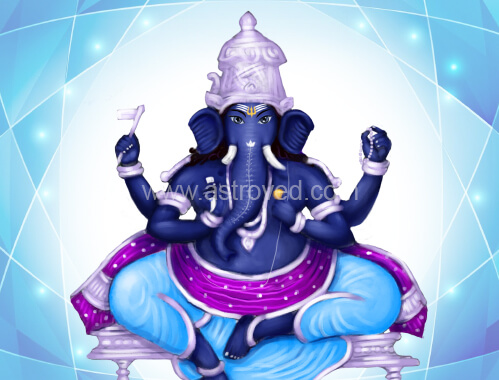 Ekadanta Ganapati is regarded as the 22nd among the 32 different forms and Ekadanta Ganapati. The word ‘Ekam’ or ‘Eka’ denotes the number one, and ‘Danta’ is the ‘tusk.’ Ekadanta Ganapati thus means the Lord with a single tusk. Ganesha is a God known to have a big belly, but Ekadanta Ganapati possesses a bigger belly, that is much larger than the ones found in any other form, which signifies that he holds the entire universe safely in his belly. Ekadanta Ganapati is blue in complexion, has four hands, holds his just broken tusk in the main right hand, and a hatchet, a japa mala of Rudraksha beads and Laddu (sweet balls) in his other three.

This form of Ganesha can be seen as a painting in the Kerala capital Thiruvananthapuram and as a sculpture in some temples in Mysore region, where all the 32 Ganapati forms are on display. This Lord can be worshipped in an idol form too, in the very famous and internationally renowned Ajanta and Ellora caves near Aurangabad city, in the state of Maharashtra.

Star Anusham, also known as Anuradha Nakshatra, is said to be related to Ekadanta Ganapati.

Ekadanta Ganapati is a compassionate aspect of the Lord. As one who gave up one of his own tusks and hence, is appearing only with a single tusk, he is thus believed to be assuring his devotees of his selfless love for them and his readiness for any sacrifice for their sake. His devotees also believe that worshipping this form would get for them the Lord’s blessings, which shall help them in focused thinking, intense action, and surefire success.

The mantra, which reads as under in Sanskrit, describes the appearance of this single-tusked Lord and prays for his grace and blessings

Chanting the Ekadanta Ganapati mantra with faith, can be an effective means of propitiating the powerful Lord.