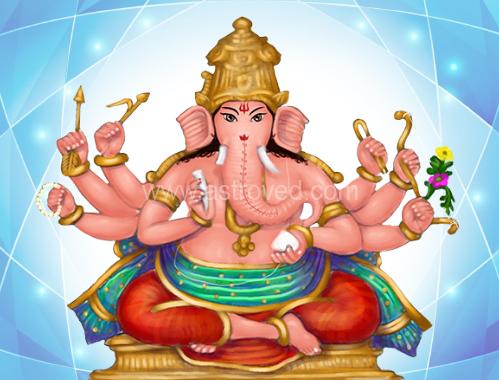 Durga Ganapati is regarded as the 31st among the 32 different forms of Ganapati. This Ganesha is considered to be unconquerable, and as if to proclaim this aspect, he sports a victory flag, as a sign of his power and strength. He also drives away the darkness in all forms. With a radiant golden yellow complexion and eight hands, Durga Ganapati looks imposing. His principal right and left hands hold the broken tusk, and a rose apple fruit, respectively. In his other hands an elephant goad, a bow, an arrow, a noose, sugarcane, and a Rudraksha Japa mala, apart from the flag of victory.

Durga Ganapati, in his idol form, can be worshipped in the famous Shri Mahalakshmi temple in Kolhapur in Maharashtra. This Ganapati is said to be associated with Uttara Bhadrapada Nakshatra, the star Uthirattathi.

Durga Ganapati is the destroyer of sins, and hence, it is believed that his worship can free the devotees of their karmic bondage and provide them with joy and happiness.

This hymn describes the Durga Ganapati form and prays to him for blessing the devotees with happiness.

This is a powerful mantra the chanting of which can get for the devotees the Lord’s divine grace.