Kolhapur Mahalaxmi Temple is a very sacred temple of Goddess Mahalaxmi, the universal mother Goddess. Laxmi or Mahalaxmi is the divine consort of Lord Mahavishnu, the supreme God of sustenance and is regarded as the Goddess of wealth, fertility and prosperity. Also known as Amba Bai temple, this place of worship is one of the very important temples in the state of Maharashtra and is counted as one of the sacred Shakthi Peethas, the most holy places of dwelling of the supreme divine feminine power. This Kolhapur Peetha has the added significance of being one of the only 6 places, where one can either get all their wishes fulfilled or get completely freed from them. Also referred to as Dakshina Kashi, it is said that the divine couple, that is, both the Lord and the Goddess reside here, together. 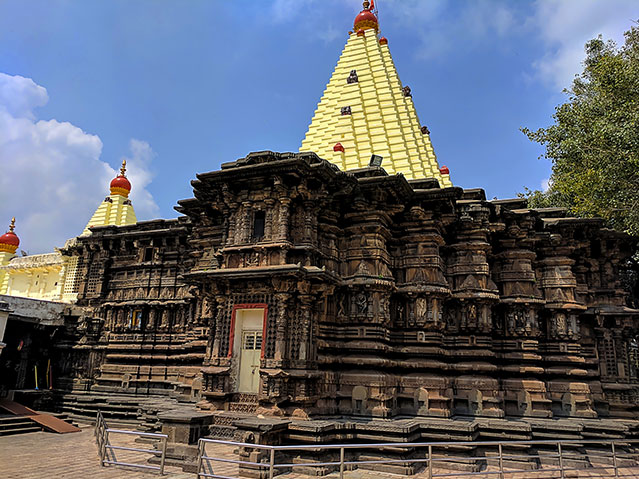 Legends associated with the Temple

The mythological stories and legends regarding this temple highlight the importance of the Goddess and also about the religious significance of this place.

The divine couple Lord Vishnu and Goddess Lakshmi once decided to descend on Earth for the good of the world and enacted a play for this purpose. Sage Bhrigu, who visited their place of stay Vaikunta then, got irritated over a petty issue and in a fit of rage, committed the sacrilege of touching the Lord’s chest with his foot. While the Lord himself took this on his stride, Lakshmi, who was residing in his heart, felt seriously offended by this grave disrespect shown to her. Aggrieved that her husband did not act against the errant sage, she left her consort and the heavens, and came down to Earth at Kolhapur, where she did severe penance for many years and then united with her husband. The place is hence held very sacred and has attracted many sages and saints from very ancient times. It is also said that Lord Dattatreya is coming here at around noon even now and seeks arms.

As per another legend, Karavira Mahatmiya, a demon named Kolhasura was harassing the Devas and other people and Mahalakshmi slayed him at this very place known as Karavira. The Goddess herself took her abode in that sacred place and the temple was erected for her there.

History and architecture of the temple

The temple belongs to the 7th century AD and to the Chalukya period. The main entrance of temple is west-facing and the courtyard inside displays many decorative lamp posts known as Deepmaalas. The 18th century built Garuda Mandap is further in, which has fine square pillars and picturesque arches. There are images of Garuda and Ganesh that face the sanctum or the principal shrine, which itself is flanked on both sides by the shrines dedicated to Mahakali and Mahasaraswathi. The grand sanctum of Mahalakshmi stands majestically in the centre.

The sanctum complex is mounted on a stone platform, where the grand image of Goddess Lakshmi is housed. The sacred idol is about 3 feet in height and is carved in a black stone. She is in a standing posture, has four arms, and is adorned with a crown that has an image of Vishnu’s couch, the Sheshnag. She is also decorated with gem stones and ornaments, and holds a large mace, a shield, a bowl and a citrus fruit in her hands. A stone image of a lion, considered her mount, stands behind her. The sacred Shri Yantra is found carved in the temple wall. The Goddess is facing west and sunlight is said to fall on her face on three occasions in a year, through a small window in the shrine. While a Shivling and Nandi are present in a shrine above the sanctum, there are many subsidiary shrines and also the temple tank Manikarnika Kund in the temple complex.

The architecture of the temple is breathtaking. Built predominantly in black stone, it consists mainly of horizontal mouldings and vertical offsets, that create a remarkable light and shade effect. The walls are also full of brilliant sculptures depicting Gods, Goddesses, damsels in various poses, musicians and dancers. The shikaras, the super structures above the sanctum and the adjourning shrines are made of brick and mortar, and are of recent times, erected during the 19th century.

Lakhs of people from all over the country and abroad visit this temple and offer worship to the Goddess right through the year. Ritualistic worships are offered to the deity, five times during the day, right from early in the morning at 5 AM till late in the night. Various sacred offerings are made and hymns are recited during these pujas. While regular festivals are celebrated on many occasions, the processional deity of the Goddess is taken around the temple courtyard, on Fridays and full moon days. It is firmly believed that the Goddess will bless sincere devotion and that it can bestow them with wealth, health, prosperity, relief from problems and overall welfare.

This temple is located on the banks of river Panchganga in the Kolhapur town of Maharashtra state, close to its border with Karnataka and is about 225 kilometres south of Pune, on the highway connecting it with Bengaluru.