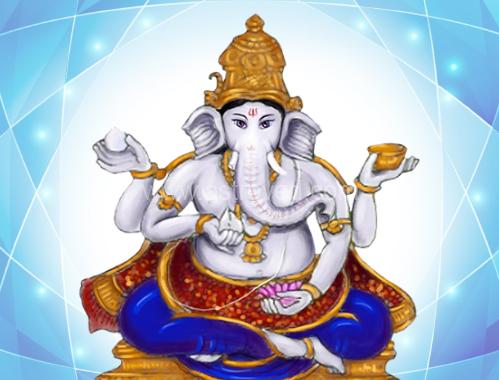 Bhakta Ganapati is regarded as the 3rd among the 32 different forms of Ganapati. ‘Bhakti’ is devotion, and ‘Bhakta’ is a devotee. This form of Ganapati is a compassionate Lord, and he is so kind to his Bhaktas, that he came to be known as Bhakta Ganapati, the devotees’ Ganesha. His benevolence shows in his appearance too, as he looks cool, calm and pleasant. He is fair and white and is shining like a full Moon in the harvest season. He has four arms, but none of them carry any weapons. Instead, they hold in them, a mango fruit, a banana, a coconut and a sweet or a kheer, the sweet payasam (milk pudding) made of jaggery (cane sugar).

This form of Ganesha can be seen as a painting in the Lord Ganapati Temple in the Kerala capital Thiruvananthapuram and as a sculpture in some temples in Mysore region, where all the 32 Ganapati forms are on display. Bhakta Ganapati can also be worshipped in an idol form in the Theertha Pureeswarar temple, also known as the Arathurai Nathar temple situated near Pennadam, in Tamil Nadu.

Bhakta Ganapati, the mild-mannered aspect of Lord Ganesha is regarded as representing the primordial element Jala, the water. People worship Bhakta Ganapati with added fervor on special occasions like Vinayaka Chaturthi, Sankashti Chaturthi, etc. It is believed that worshipping this kind Lord shall help the devotees to obtain his blessings in abundance and thus, get protected from all dangers and difficulties in life. His worship can also help control temper, get relaxed and feel happy and joyful.

The mantra, which reads as under in Sanskrit, offers worship to this ‘Lord of his devotees’, describes the Ganapati’s form, and prays for his grace and blessings.

Chanting the Bhakta Ganapati mantra with faith can be an effective means of propitiating this kind-hearted Lord.