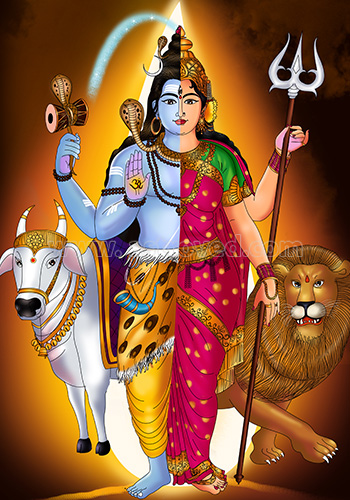 Ardhanarishvara is the half-man, half-woman form of Lord Shiva, whose body merged with Goddess Parvati to create this divine entity. The masculine and feminine energy is present in equal measures in this avatar and reflects how the composite energies unite to represent the universal power inherent in every living organism. This form also signifies the bond of the divine couple Shiva and Parvati, as an inseparable and united part of life and nature.

The male and female aspect of the universe came into existence only through this holy union and allowed for all of creation to take place. This unique and distinctive form is also popularly referred to as ‘Ardhanaranari,’ ‘Naranari’ and ‘Ammaiappan.’ These are respectively known as ‘half-man, half-woman,’ ‘man-woman’ and ‘mother-father.’

This unique form of the divine couple is portrayed either with two or four arms. Shiva assumes the left side of the entity and Parvati assumes the right side. Shiva is shown wearing a headdress and a crescent moon on his head. River Ganga flows through his matted locks, and a serpent is coiled around his neck. In some instances, a half mustache and a half third eye are also depicted. One hand wields an axe, and the other is in the ‘Abhaya Mudra’ posture, which signifies protection and the dispelling of fear. At times, Shiva is also shown wielding a trident in one hand and the other outstretched in the act of conferring blessings.

Goddess Parvati is depicted wearing a basket-shaped crown on her head, ornamented earrings, and a ‘Tilak’ (round red dot) on her forehead. Her eyes are adorned with Kohl, and a blue lotus dangles gently from her neck. At times, she is also shown holding a flower and mirror in her hands. Her beautiful countenance is enhanced with various kinds of jewelry, adding luster to her charm.

This unique form of Lord Shiva and Goddess Parvati is indicative of the fact that male and female energies are inherent in everyone. It is only when we accept both as an inevitable part of our beings that we shall be able to experience divine bliss. This form of the divine couple is also attributed with bringing about harmony between ‘Shaivism’ and ‘Shaktism,’ followers of Shiva and Parvati respectively. This form also indicates that God is beyond gender and can assume any form at will. It also serves to highlight the importance of leading a harmonious domestic life, when both the male and female of the household learn to compromise and co-exist with each other, irrespective of the shortcomings of their partners.

The male half of this union represents the passive state of being, and the female part represents the active part. Only a combination of both serves to form an entity capable of handling the challenges of life and overcoming adversities. It is only when the ‘Purusha’ (male) and ‘Prakriti’ (female) creative energies are combined together, that the cycle of evolution manifests itself to create the universe and its multitude of animate and inanimate beings.

Legend states that Lord Shiva was once immersed in a trance and dancing in a state of frenzy. This enthralling sight aroused the curiosity of Parvati who wished to experience the same fervor as her Lord. She expressed her desire to merge with the form of Shiva so that she may also experience the same excitement and enjoy this blissful state of the Lord. Upon hearing her pleas, Lord Shiva advised her to sit on his lap. Without any hesitation, Parvati dedicated her entire being to Shiva and immediately sat on his lap. Lord Shiva was so impressed with her complete surrender to him, that he absorbed her into his very own being, thus creating the transcendental form of Ardhanarishvara. This awesome form of the divine couple has no parallel in the universe and represents the truest and purest form of male and female symmetry.

Worshipping this unique form of formless Shiva and Shakti energy can promote unity among couples, strengthen relationships in profession/business, destroy all obstacles and can nourish with overall wealth, well-being and prosperity