Goddess Adi Lakshmi is an Avatar of the Divine Mother Lakshmi, the consort of Lord Vishnu . She is considered the primordial form of Lakshmi and the origin of all existence. She is also the unquestionable force behind all of creation and it would be inconceivable to even imagine the Universe without her guiding hand. She is often referred to as Mahalakshmi and resides in Vaikunta with Lord Vishnu. The Goddess is also known as ‘Ramaa’, the one who is credited with bringing happiness. She is an inseparable part of Vishnu and both together are considered as one single entity.

The Goddess is depicted with four hands and seated on a pink Lotus with a calm and pleasing demeanor. She is extremely beautiful and attired in red clothes, with gold jewelry adorning her body. Two of her hands portray the Abhaya Mudra and Varada Mudra, while the other two are shown with a lotus and white flag, respectively. She is thus portrayed as a symbol of pure knowledge, purity, cleanliness and clarity of thought. 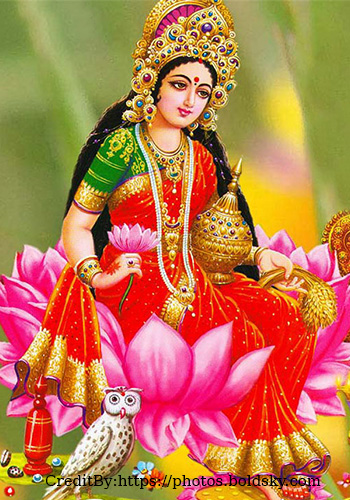 The Goddess was invoked during the great churning of the sea and believed to be Moksha Pradayani (the one who bestows liberation). Sage Brhigu is said to have beseeched the Goddess to come out of her dormant state and take up an active role in the affairs of the Universe.

The Goddess represents fertility and married women, hence white flowers are not offered to her as they symbolize being a widow. It is considered auspicious to offer her all types of red flowers which signify love and desire. The Goddess also favors cleanliness and keeping one’s place free of clutter is said to attract her grace. Lighting of lamps is also considered favorable to propitiate the Goddess, since they remove evil and ignorance from one’s psyche. Chanting the Ashtottara Shatanamavali (108 names of Adi Lakshmi) is also a way of communicating with the Goddess.

The Goddess dispels all the fear of her devotees and bestows one with wealth, success and happiness. She is the Goddess of continuous wealth, with no beginning and no ending. Adi Lakshmi is the epitome of compassion and always offers help and charity to her devotees. All those who pray to her with devotion and a pure heart are absolved of their sins, while ultimately gaining salvation. 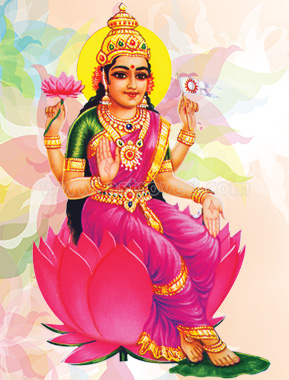