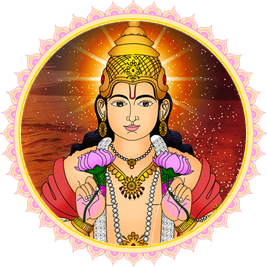 ‘Fasting’ refers to abstaining from food or certain kind of food items as a prayer or tribute to the divine. Fasting has both spiritual and physical benefits for the observer. It offers you an opportunity to connect with your favorite deity and purifies your impurities, both external and internal. Also called as Upavas or Vrat, fasting can help cleanse your system and improve your body metabolism.

Each of the 7 week days actually represents a planet and is named only after them, as per the Hindu system. Thus, Monday represents the Moon; Tuesday, Mars; Wednesday, Mercury; Thursday, Jupiter; Friday, Venus; Saturday, Saturn; and Sunday, the Sun. Apart from this, the weekdays are also dedicated to different specific deities. It is strongly believed that offering prayers to that particular deity and the planetary god on his or her special weekday would please the deity and help receive their blessings in abundance.

Sunday and the Planet Sun

Sun is the center of the solar system, which all the other planets revolve around. He is self luminary and remains the primary source of all energy in the world. Though astrology counts the Sun as the prime among the planets, astronomically Sun is not a planet, but is a star, and can be thus be termed as the ‘superstar’ among the planets. Sun is called Surya and is also known by many names, one of which is Ravi and Sunday, the day of the Sun, is known as Ravivar. While this celestial entity represents a host of qualities like conscience, intelligence, individuality, courage, devotion to God, immunity, self-reliance, liberal attitude, honor, trustworthiness, royalty, leadership and fame, he primarily signifies power and authority. The Sun God himself, who is also referred to as Surya Narayana, is worshipped as the presiding deity on Sunday. 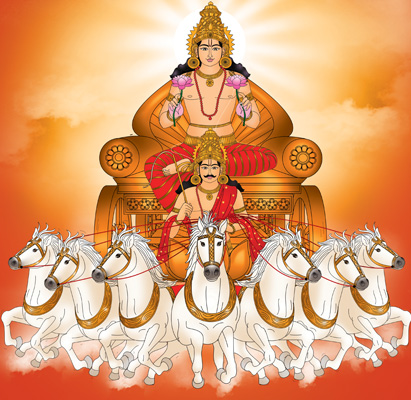 There lived a poor woman who was very pious. She used to clean her house and apply cow dung all over the surface daily, as cow dung is regarded sacred and applying it remains an age old practice. The woman used to offer prayers and take food only after this daily exercise. She was too poor to own a cow and used to collect the dung from the cow of her neighbor. Gradually, the neighbor grew jealous of this woman, tied her cow inside her own house one day and thus denied the poor lady, access to its dung. Unable to get the dung for applying in her house, the woman felt miserable, abstained from food the whole day and fell asleep in the evening, starving. That day happened to be a Sunday, the favorite day of the Sun God. Pleased with her fasting on that day, Surya Dev showered his blessings on her so that she could get a beautiful cow on her own, which gave her gold along with the regular dung. The woman was overjoyed at the planetary God’s mercy and began worshipping him fervently.

But her mean neighbor got wind of the turn of events, tipped off the greedy king about the gold producing bovine, who sent his men immediately and took away the cow forcibly from the lady. The pious woman rued her fate, prayed to God and went without food that day too, which also happened to be a Sunday. The Sun God intervened again, this time chastising the king for his crime, through a dream. The king woke up with a start and found that instead of the yellow metal that he longed for; all he got from the cow was its dung. Realizing his mistake, he returned the animal immediately to the lady along with enough wealth with which she can support herself comfortably. He also punished the jealous neighbor suitably. People realized the greatness of Surya and began observing the Sunday fasting in his honor throughout the kingdom.

Devotees start the Ravivar Vrat or Sunday Fasting on Sunday morning with the offering of water to the Sun God and performing the Pooja. As red is his color, his idol is dressed in red, and is decorated with flowers like red lotus. The worship is also done by offering incense, sandalwood paste, wheat grain and specially prepared dishes. Then the fast begins with the reading of Ravivar Vrat Katha (story of the Sunday fasting) and continues till the sighting of the Sun next morning, when it is concluded with the offering of water to the deity. People can eat one meal during fasting, and if so, it should be taken before sunset and also, without salt, oil and fried items. Many give alms also to the poor. It is considered auspicious to begin the fasting on the first Sunday in the Shukla Paksha, the waxing moon fortnight, in Ashwin month (Sept-October) that corresponds to the Tamil month Purattasi. The fast can be continued for the next 12 or even 30 consecutive Sundays.

There are famous temples dedicated exclusively to Sun God like Suryanar Koil in Tamil Nadu, which also contains shrines for all the planets. People in large numbers visit the temple and offer prayers to Surya Dev and other planetary Gods.

Benefits of Fasting on Sundays

Ravivar Vrat or Sunday fasting shall please the mighty Surya and help to win his great blessings. Sunday fasting and chanting the powerful Aditya Hridaya Stotram (sacred hymn recited in praise of Aditya, the Sun God ) can bestow you the following blessings:

The Sun embodies the spirit of life, and all living beings on Earth owe their very existence to the light and energy emanating from its core.

Awaken the leader in you! Think out of the box. When you are meek with your actions or when others dictate terms to you,...