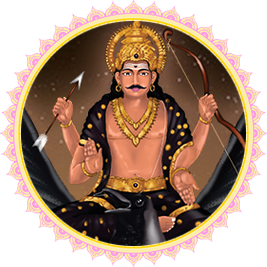 ‘Fasting’ refers to abstaining from food or certain kind of food items as a prayer or tribute to the divine. Fasting can offer you both spiritual and physical benefits and gives you an opportunity to connect with your favorite deity. It purifies both your external and internal impurities. Also called as Upavas or Vrat, it can also help cleanse your system and improve your body metabolism.

Saturn remains perhaps the most feared divine entity in the Hindu pantheon. While people generally pray to Gods seeking relief from other troubles, they worship Shani to reduce the intensity of his negative effects. Planet Saturn is called Shani, and Saturday, the day of Saturn, is known as Shanivar. While this slow moving planet represents austerity, longevity, concentration and meditation, discipline, and restrictions, it particularly signifies old age, disease, suffering and even death. It also has the power to obstruct and destroy. This is the reason he is given the epithet Eshwara, from the supreme Lord Shiva himself and is called as Shaneeshwara. The presiding deities of planet Saturn are Lord Shiva and his incarnation, Hanuman and Saturdays are dedicated for their worship. 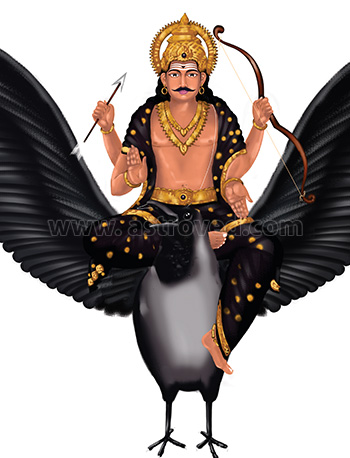 There arose a debate once, among the nine planets , as to who was the most powerful among them. The issue went to Vikramaditya, the wise king of Ujjain for adjudication. Vikramaditya made nine thrones out of metals like gold, silver, bronze, copper, brass, tin, zinc, mica and iron and requested each of the planetary Gods to occupy one of them. While other planets rushed and occupied the thrones made of superior metals, Shani was left to occupy the unoccupied throne of iron. Then, the king gave the verdict that the power of the planet is in line with the standard of the throne he has occupied. Forced to occupy the throne of iron, the most ordinary of metals, Shani felt aggrieved at the decision of the king and decided to return the compliment to him. And serious troubles began for the king.

Just a few days later, Vikramaditya who went for hunting in the forest lost his way, was starved for food, strayed into some other territory, was caught and charged by the people as a thief, and had his hands and feet cut off, as a punishment. Still he managed to get a job as an oil seed crusher and was carrying on with his life stoically, with prayers and firm faith in God. This earned for him the mercy of Shani, who withdrew his curse. With the ending of the bad patch, Vikaramaditya regained his limbs, married the princess of that land and returned to his kingdom to an emotional welcome by the people. Realizing the importance and power of Lord Shani, because of whose curse he had to suffer terribly for seven and half years, Vikramaditya began worshipping Shani and observing the Shanivar Vrat.

Another interesting mythology associates Shani with Hanuman . Once Shani got cursed by Lord Brahma that he would undergo confinement and be ultimately be freed by an incarnation of Lord Shiva. Later, Hanuman went to Lanka in search of Sita, found her there, then picked up a fight with the demons there, troubled them and then set fire to Lanka. Just before returning, he found Shani in Ravana’s captivity. An aspect of Shiva that he is, Hanuman released the planetary God and carried him on his shoulders to freedom. Extremely delighted, Lord Shani granted a boon to Hanuman that his devotees would not suffer due to the ill effects of Shani.

Shanivar Vrat or Saturday fasting is observed from morning to evening. Devotees consume a single meal after fasting and offering prayers to Shani. Black is the color for Saturn and Saturday, and hence even the food consists usually of sesame (til) or black gram or any other black colored items. Salt is generally avoided on the day. People offer prayers to Lord Shiva, Hanuman and Shaneeshwara, chanting mantras and reading sacred texts. They also visit temples or shrines dedicated to Shani. Special worships are performed when offerings of black gram, til oil and sesame seeds are made. Some give black clothes and black umbrellas in charity. It is considered auspicious to begin the fast on the first Saturday in the Shukla Paksha, the waxing moon fortnight, in Shravan month (July-August) that corresponds to the Tamil month Aadi. There are also devotees who continue this fasting for 11 or even 51 Saturdays, without a break.

There are famous temples dedicated exclusively to Lord Shani like Shani Shingnapur in Maharashtra, while Tirunallar Shanishwara temple is also often visited by devotees.

Benefits of Fasting on Saturdays

Saturn is the most dreadful planet among all the other planets. While he transits to your zodiac, he makes sure that he puts you through trials and tribulations.

The Saturn Homa (Fire Lab) is dedicated to the planet Saturn and is performed to appease and harness his blessings to overcome trials and tribulations in life.