The Vignahar Temple of Ozar is located in Junnar Taluka, district of Pune in Maharashtra. It is a famous Hindu temple dedicated to Lord Ganesha- the Elephant headed God who is the son of Shiva and Parvati and the brother of Murugan. The temple is one among the eight Ashtavinayaka shrines of Ganesha in the state of Maharashtra, India. It is situated on the banks of the Kukadi River, in a calm and serene environment.

Ganesha is the fount of wisdom, knowledge & intelligence and the most loved God in the Hindu pantheon. Any auspicious occasion begins only after paying obeisance to him, as he is considered the remover of obstacles. He is the one who vanquished the evil demon Vighnasur and rid the world of evil forces. His benevolence endears him to his worshippers, who flock to him in a bid to overcome difficult times and conquer hardships. His presence pervades the entire area and devotees from all over the world come just to have a glimpse of their beloved Ganesha. 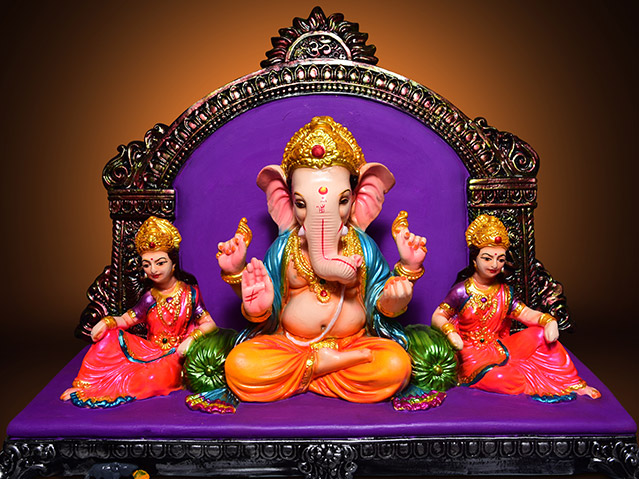 The Ozar Ganpati temple is believed to have been built in 1833 and renowned for its Deepmalas & Golden dome. The military commander of Peshwa Baji Rao renovated the temple after seizing it from the Portuguese and covered the dome and pinnacle with gold. Renovation work was also carried out in 1967 by an ardent devotee of Ganesh, Appa Shastri Joshi.

The idol of Vinayak in the Ozar Ganpati temple faces east and its trunk is turned toward the left. It is covered with vermilion and has two emerald studded eyes, along with a diamond on its forehead and navel. The Idol is flanked by brass images of His consorts Riddhi-Siddhi, who stand on either side. Many believe the Idol was not formed by human hands and is self-existent in nature (Swayambhu). Lord Ganesh is worshipped as Vigneshwar-the remover of obstacles and takes on this name after vanquishing the demon Vighnasur who implored him to stay on and use his name as a prefix.

The temple is constructed in the Mandir architecture style and features a spacious courtyard, along with a grand entrance and exquisite sculptural and mural work. Two large stone Dvarpala (gatekeepers) guard the large entrance and upon entering the large walled compound, one can view the Lenyadri shrine and Shivneri fort. The two large Deepmalas (lamp towers) stand near the gateway which leads to a corridor with seven cusped arches. The complex houses two meditation rooms with three entrances which are tastefully sculpted, leading to the main temple. Going further, we enter a large domed structure which fills us with spiritual fervor and as we move into the third dome, we are greeted with the Idol of Lord Ganesh sitting calmly on a holy mouse. The sheer joy of witnessing this spectacular image of the deity sends one into raptures of ecstasy and fills our hearts with peace.

Benefits or Blessings of the primary deity- Ozar Ganapati

Lord Ganesh is revered as the God who is prayed to first before conducting any other Puja, All auspicious occasions, including weddings and house warming ceremonies are celebrated first by offering obeisance to the Elephant God. He drives away our worries, removes obstacles in our paths, and helps us overcome hardships in our lives.

Location – How to reach the Vighnahar Ganapati Temple, Ozar

The temple is located on the Pune-Nashik highway and about 85 km from Pune city. Many options are available to get there and have a Darshan of the beloved Elephant God.

By Flight: The nearest Airport is located in Pune city which is about 85 kilometres away. You can catch a taxi from the Airport to take you to the temple.

By Rail: Pune is the nearest railway station and well linked with other major cities of India by rail. Taxis and buses are available outside the station to take you to the temple.

By Bus: There are regular buses plying from major cities of the country to Pune city.

Local Transport: Several state run bus services operate from Pune and Mumbai to Junnar. One can reach the temple by taking taxis or auto-rickshaws to Ozar.