Shirdi Sai Baba Temple is one of the most sacred and revered religious destinations dedicated to the life and preaching of Saint Sai Baba, who is lovingly called as ‘Sai’ by his devotees. The temple is located in Shirdi, a small town in Ahmednagar, Maharashtra, which is 270 km from Mumbai. Spread approximately around 200 sq. mtrs, the holy shrine is one the most visited pilgrimage destinations from devotees all over the world. 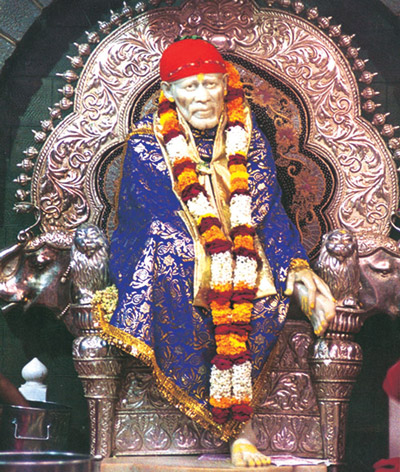 To continue the sacred teachings and services of Sai Baba, the temple was established in the year 1922. The real name and birth place of Baba are unknown. He arrived at Shirdi at the age of 16. He was called as Sai by a local priest named Mahalsapati.

‘Sai’ is a Persian title given to Sufi saints and ‘Baba’ means father, grandfather, old man etc. in languages of India and Middle East. Thus Sai Baba denotes ‘holy father’ or saintly father’. He initially stayed under a neem tree in the Khandoba temple and disappeared after three years. He returned to Shirdi in 1858, when he was asked to take residence at a local mosque, later named as Dwarkamayi.

Sai believed charity is the definitive way to reach God and insisted his devotees on sharing, treating people with respect and to offer place of stay for the poor.

Sai Baba left his physical body on his own will on 15th Oct. 1918. Shirdi Sai Baba temple is a beautiful shrine built over the Samadhi (trance) of Shri Sai Baba.

Shirdi Sai Baba opposed discrimination based on religion and his teachings are followed by his devotees in all religions including Hinduism, Islam, Zoroastrianism, and Christianity. Anyone who enters this Holy Shrine will be guided by Sai to lead a happy and healthy life. His philosophy of ‘Allah Malik Ek’ which means ‘God is One’ is a proven truth and is denoted by the devotees of various religions visiting the temple.

In the mosque Dwarkamayi, Sai Baba maintained a sacred fire called as ‘Dhuni’ from which he gave sacred ashes called ‘Udhi’ which was believed to have healing power.

Rama Navami – is celebrated during the month of March or April with huge zest and devotion. The festival is relished by both Hindus and Muslims. The flags of Dwarkamai, the mosque are replaced on this day along with the sack of wheat kept there.

Guru Purnima – is celebrated on the Full Moon Day in the month of July with great reverence and passion. The day is dedicated to Guru to honor him and seek his blessings.

Vijayadashami– is the day when Sai Baba left his mortal body to the heavenly abode. The day is also called as Shri Sai Punyathithi. During this festival ‘Brahman Bhojan’ is arranged with Guru Dakshina (Donation to Guru). Devotees from all over India flock to Shirdi to pay their respects to Shri Sai Baba.

By Air: Aurangabad is the nearest airport to Shirdi, at a distance of 144 km. Bus service is available from Aurangabad to Shirdi.

By Rail: Shirdi is well connected to all major cities in India. The station name is “Sainagar Shirdi” which has regular trains plying from Chennai, Mumbai, Vishakapatnam, Secunderabad and Mysore. The other main railway stations located nearby are Kopergaon (15 km), Nashik (119 km), Manmad (87 km), and Ahmednagar (83 km). Regular buses are available from these cities to Shirdi.

By Road: State transport buses are available from major cities in Maharashtra as well as from the surrounding states of Andhra Pradesh, Telangana, Karnataka, and Tamil Nadu.