Saibaba was one of the great saints that our country has seen. He lived almost throughout his life in the small village of Shirdi and hence, is known commonly as Shirdi Saibaba. The word ‘Sai’ denotes ‘sacredness’ or ‘a saint,’ while ‘father’ or ‘a well-respected elder’ is generally referred to as ‘Baba.’ Thus, Saibaba can be termed as a saintly father figure. He used to claim ‘Allah Malik,’ that is, ‘God is the ultimate Lord’ and ‘Sabka Malik Ek,’ that is, ‘It is the same God, who rules over all,’ thus conveying the greatness of the Almighty and stressing unity among people. 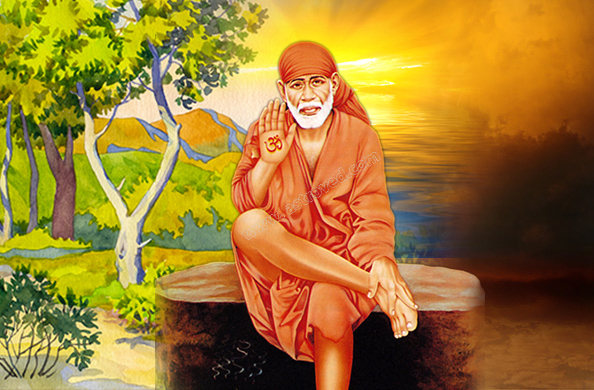 Even when he appeared first in Shirdi as a lad, he was seen deep in meditation and doing difficult yogic practices. His simple life and austerities continued until the very end. He stayed in a dilapidated mosque and called it Dwarakamai, a name that has a strong connotation with the Hindu religion. He wore a long flowing garment known as Kafni, life a Muslim fakir, and quoted from both Hindu scriptures and from Koran, the sacred Muslim text. Thus, he lived as a homogeneous mix of the Hindu and the Islamic traditions. He lived the life of a mendicant, going around the village and begging for his food from house to house. He willingly shared that food too, not only with his devotees but also with stray animals like cats and dogs. He slept on the floor, keeping just a brick under his head for a pillow. He sang Bhajans or devotional songs in praise of the Hindu Gods and danced merrily with the Muslim fakirs.

Saibaba performed innumerable miracles, essentially for saving people from calamities and for showing them the right life path. He spoke in simple terms and taught devotees profound spiritual concepts and great wisdom, contained in various scriptures. He made no distinction between castes and religions and treated the rich and the poor alike. People from in and around Shirdi, then from the whole of Maharashtra and later from many parts of the country began flocking to him, seeking his guidance and blessings.

The details on the advent of Saibaba and his early life are mysterious and unknown. Nothing is known for sure about when and where he was born, who were his parents, and whether, he is a Hindu or a Muslim. He surfaced one day, as a bright, young man of about 16, in the Shirdi village in the Ahmednagar District, in the state of Maharashtra, around the mid-19th century. He left the place shortly afterward, only to reappear there after about a year. Since then, Saibaba made Shirdi his permanent home and lived there continuously until his shedding of the mortal coil in the year 1918.

Saibaba continued with his saintly life, helping people in various ways and breathed his last, attaining Mahasamadhi on the Vijayadasami festival day of 15 October 1918. People were disconsolate at his passing away, but took courage on his assurance that he shall continue to live even after shedding his body and would be blessing and guiding them. Saibaba was interred in Shirdi itself, very near the Dwarakamai mosque and the place, known now as Samadhi Mandhir, is held very sacred by people and is visited by millions from all over the country and the world.

Saibaba advised people to believe in God, chant his name with faith, and lead an honest life, not to discriminate fellow humans, love everyone and show compassion to all the creations of God. He also assured his devotees that he would always look after their welfare and advised them to surrender all their difficulties to him. “Why Fear when I am here’ is a very important message that he conveyed to everyone. People worship him at homes and also in temples, many of which have come up all over the world, and his Samadhi Mandir at Shirdi, which remains to be the most important place of Saibaba worship, is visited by an average of more than 20,000 devotees every day.

Rama Navami (Chaitra month - Mar to Apr) is the festival celebrating Saibaba with grandeur and equal participation from both Hindus and Muslims. Saibaba, the loving Guru, is revered and honored on Guru Purnima or the full Moon of the Gurus (Ashada month – Jul to Aug) to receive his graceful blessings.

Vijayadashami(Ashvin month – Sep to Oct), also known as Dussehra, is the sacred occasion when Saibaba shed his mortal coil and that day is observed with devotion as the Maha Samadhi Day. On that occasion, a large number of people offer worship to Baba in temples, in public gatherings, and at homes, sing Bhajans (songs) and chant his holy name. They also do generous charities and feed the poor and needy.