Introduction about the Mumba Devi Temple

The Mumba Devi Mandir is an ancient Hindu Temple located in the Metropolis of Mumbai in the state of Maharashtra, India. The temple is dedicated to Mumba Devi, an Avatar of the Mother Goddess and considered the patron Goddess of Mumbai. Indeed, the city itself is named after the Devi and she is popularly referred to as ‘Maha Amba’. She is highly revered by the early inhabitants of the city ‘The koli fishermen’, who regard her as their guardian. Mumba Devi is venerated as the Goddess of Power and depicted as a black stone sculpture in the Sanctum. The temple is in the heart of the city and a popular place of worship for many of the city’s inhabitants. Today, it is a much sought after tourist destination, attracting people from all over the country and the world. 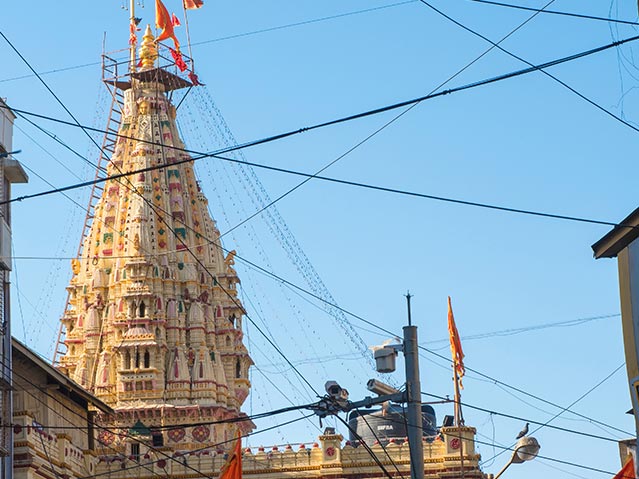 History of the Mumba Devi Temple

The origins of the Mumba Devi temple go back a long way in time and it is believed to be at least six centuries old. It was first situated at Bori Bunder, but was destroyed sometime between 1739 and 1770. It was subsequently rebuilt at the same place in Bhuleshwar. An earlier shrine of the Goddess built by the Koli fishermen at the Victoria Terminus was dismantled in 1737 and relocated to Phansi Talao. The area around the temple at present is a bustling and crowded market frequented by steel and cloth merchants.

Significance of the Mumba Devi Temple

Mumba Devi is considered as the personification of Mother Earth and still worshipped by people of Dravidian descent hailing from western and southern India. The image installed in the modern shrine is depicted in a robe with a silver crown, a nose stud and a golden necklace. A stone figure of Annapurna seated on a peacock stands at the left and the carrier of the Goddess stands in the form of a tiger in the front of the shrine.

Architecture of the Mumba Devi Temple

Though the architectural style of the temple is not elaborate, the structure is still a striking piece of construction. The Idol of the deity is beautifully dressed and placed on an altar decorated with marigold flowers. The Image does not have a mouth which symbolizes its comparison to Mother Earth. The complex also houses the shrines of Ganesha, Maruti, Mahadev, Indrayani, Murlidhar, Jagannath, Narsoba and Balaji. Flowers and other Puja items are available right outside the shrine, with many shops offering all the necessities required to perform the rituals.

The temple observes festivals like Chaitra Navaratri and Ashwin Navratra, which are celebrated with great enthusiasm and fervor. Visitors to the shrine number around 10,000 on an average and on festivals the number increases to as much as 25,000. The weekends witness an unprecedented number of visitors, sometimes exceeding even a 100,000.

Benefits or Blessings of the primary deity- Mumba Devi Temple

Goddess Mumba Devi blesses her worshippers with good health and prosperity. Those who aspire for victory in battle or wish to improve their oratory skills are also benefitted by praying to the Goddess . She is also known to bless couples who desire progeny to carry on their lineage. Mumba Devi does not disappoint devotees who pray to her with a clean and pure heart, granting them what they desire.

Location – How to reach the Mumba Devi Temple

The temple is open on all days except Mondays. Located in the financial Capital of the country, Mumbai, the shrine is easily accessible by Air, Rail, Sea and Bus.

Local Transport: Auto-rickshaws and taxis are available from various points in the city to take one to the Mumba Devi temple. Local trains are also available, with Charni Road station closest to the temple.

By Rail: The distance from CST Railway Station to the temple is around 2 kms.

By Air: The CST Airport in Mumbai is around 20 kms away.

By Bus: Mumbai city is well connected by bus to all neighboring towns and cities.