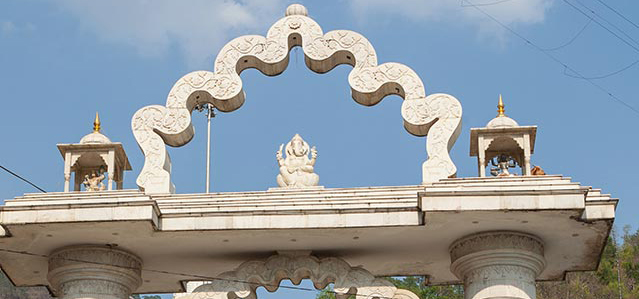 The origin of the temple dates back to the time of the Peshwas, who were the rulers of the Maratha empire, before the British rule. It is said that Sardar Haripant Phadke, a noble in the court of the Peshwas, was getting a well dug in a plot of land that he owned, when the sacred idol of Ganapati was found in that place. A pious man that he was, he immediately arranged for building a nice temple for the Lord in that very place. There are also some documentary records to show that this temple were donated subsequently to the Peshwa rulers as part of a dowry, given at the time of marriage.

Significance of the Lord and the Temple

Lord Dashabhuja Ganapati here is a unique form of the God. The Sanskrit word ‘Dasha’ means, number ten and ‘Bhuja’ denotes the hand. Thus, Dashabhuja Ganapati literally means, ‘the Lord with ten hands’. True to his name, the idol here looks grand and majestic, with five hands each, on both sides of his body.

But, there is a greater significance to this deity. It can normally be seen that the trunk of this elephant faced God will remain turned only towards the left. But, the trunk of this Dashabhuja Ganapati is turned towards the right. Mythology and tradition regard that such a trunk is a sign of great auspiciousness and that the Ganapati having his trunk turned towards right should be taken as extremely divine. Hence, the Lord here is worshipped with immense faith and devotion. The main idol of Ganesha installed in the sanctum is made of stone and is chrome coloured. It has been crafted with artistic finesse and looks appealing. His consort Riddhi, who is seated on his lap, looks beautiful too. Simply standing before the deity and looking at his face can calm even the agitated minds and bring peace and tranquility to any individual. The temple too, with its welcome arch, the spire and sanctum looks artistic and elegant. Thousands of devotees visit this temple daily for offering prayers to the Lord. The crowd increases manifold during special festive occasion like Ganesh Chaturthi.

There is also a small temple for Lord Hanuman, the great devotee of Lord Rama in the same compound. Devotees in large numbers worship this God especially on Saturdays, offering him oil and flowers.

It is Shri Devdeveshwar Sansthan, which manages the affairs of the temples like Mrutunjayeshwar Temple, Sarasbaug Temple, Parvati Hill Temple and the Ramana Temple here, which takes care of the management of this temple too.

Dashabhuja Ganapati temple is situated in the busy Karve Road in the heart of the Pune city itself. This is around 8 kms from the Swargate station and can also be reached in just 5 minutes from the Mruthyunjayeshwar temple, another famous temple of Pune. This temple is also well connected by local transport with all parts of the city. Pune is a big city which is very well linked by air, rail and road with many other cities and towns of the country.