Thyagarajaswamy Temple is a prominent Shiva Temple of South India, which is situated in Tiruvarur. The prominent deity is Shiva who is worshipped as Vanmiganathar and Goddess Parvati is worshipped as Goddess Kondi Amman. Shiva is depicted as Somaskandar. This temple is highly revered by Tamil Saints and Nayanmars.

This town is also called as Kamalalayakshetra as it has a lot of lotus flowers. This temple has an important place among the worshippers of Shiva and it has been referred to in ancient Sangam Tamil literature several times. The temple also has a museum, which has various artifacts on display for the public. It attracts various people across the globe for its splendid architecture and grandeur. 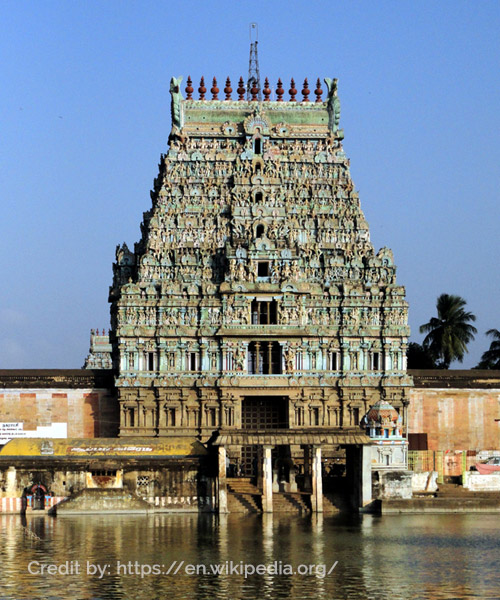 The legend of this temple holds an important part in history. King Muchukunda of Chola Lineage, once prayed to Indra to give him an image of Thyagaraja Swamy. To test the devotion of the king, Indra placed the image among several copies and asked the king to select the correct one. The king was highly successful In selecting the correct image of the god. Pleased by the devotion, Indra gave him all the images. Thus the correct image was placed in the temple of Thiruvarur and the rest of the images or idols are placed in the subsequent temples in Tamil Nadu. Many people believe that the Pallava Kings and Nayaka Kings were instrumental in building this shrine into a large one. The temple was modified several times by Chola kings too.

This temple is one of the oldest shrines built by Chola Kings in Dravidian style architecture. The temple covers 33 acres. There are several halls, courtyards and a temple tank. This is one of the shrines known for its architectural marvels. There are several other shrines for various Gods and Goddesses such as Kamalaamba, Vanmikanathar and Thyagaraja. The Kamalalayam temple tank of this temple is one of the biggest temple tanks of India. It is important to note that the Navagrahas or the nine planets will be standing in a straight line, unlike other temples in the row of three each. The foot of Thyagaraja is shown only twice a year, and otherwise, it is covered with flowers.

The Thyagaraja car festival is celebrated once in twelve years. The chariot of this temple is famous worldwide and has a great reputation for being one of the finest chariots in terms of its size and intricate architecture. There are several festivals that are very prominent in this shrine which are Maha Shivaratri, Tamil New Year, Deepavali, Arudra Darshan, Makar Sankranti

Shiva is highly compassionate towards his devotees. People who wish to start a new venture in business and career would visit this temple. Shiva is prominent in the shrine as a bestower of boon and is believed that he will not leave his devotees empty-handed.

How to reach Thyagarajaswamy Temple

The nearest Airport in Trichirapalli which is 150 kilometers away. It is nationally and internationally connected. There are numerous modes of local transport from the airport to the temple.

The city of Thiruvarur has a railway station very close to the temple premises.

Roadways are well established, where there are local buses, and buses which connect to other major cities of Tamil Nadu. Buses connecting to other states are also frequently available. Other than buses, taxis and autos are also available.