Tiruthani Murugan Temple is located on Tiruthani hill, Tamil Nadu. It is a Hindu temple dedicated to Lord Muruga and is considered one of the six holy abodes of Lord Muruga (Arupadaiveedu) and has 365 steps that represent 365 days of the year. Sri Vallimalai Swamigal began Padi Pooja (worshipping the steps) in 1917. On New Year’s Eve, each step is washed, and turmeric and kumkum are applied to it. The ritual consists of lighting lamps with camphor (Aarti) while singing the hymn Tirupugazh. After the pooja (prayer ritual), special poojas are performed to Murugan to welcome the new year at midnight 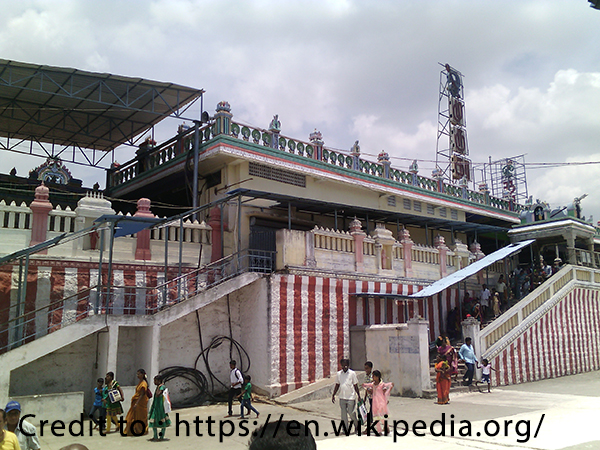 There are several legends about the temple.

King Nambirajan, the King of Kataragam Veddas, and his wife prayed to Shiva for a child. One day the king found a baby girl in the forest. He took her to the palace and raised her as his own. She was named Valli. The girl Valli grew up to be a beautiful maiden who became a staunch devotee of Murugan. Valli loved Murugan even though she had never seen him, and made a solemn vow to marry him only and never any mortal man. To test her resolve, Murugan appeared before her disguised as an old ascetic. In a secret plan, Ganesha appeared in the form of a wild elephant to frighten Valli. The hermit then scared the elephant away and rescued Valli, who rushed into his arms. Vali wanted to thank him for saving her and asked him to demand anything he desired as a reward. He requested Valli to marry him. Though she was thankful to him, she refused. Murugan later revealed himself to her, and she accepted the proposal. It is believed that the wedding of Murugan and Valli took place in Tiruthani.

Another legend is of Indra, God of the Heavens, who gifted his elephant Airavatam as part of his daughter, Deivanai's dowry, during her wedding to Murugan. (Murugan has two consorts, Valli and Deivanai). After Airavatam’s departure, Indra found his wealth waning. Murugan offered to return the white elephant, but Indra refused to accept the return of a gift that he had made. Instead, he requested that the heads of the elephant statues in the temple face his direction. Thus, the elephants in this temple face the east, the direction of Indra.

Another legend is that Indra presented a sandal stone as part of Deivanai's dowry. Sandal paste ground on this stone is said to acquire medicinal value when applied to the image of Murugan. It is not ground on regular stones, but on the one believed to be gifted by Indra. Devotees do not put this sandal paste on their forehead but dissolve in water and consume it as it is believed that to cure them of any disease. It is available only on festival days.

Among others, Tiruthani is the place where Murugan shed his anger and fury after conquering and destroying the demon, Surapadman, in Thiruchendur. Rama, after killing Ravana, worshipped Shiva at Rameswaram, then came to Tiruthani to find perfect peace of mind by praying to Subramanya. Brahma worshipped at the holy spring known as Brahmasonai after his imprisonment by Murugan for his failure to explain the Pranava (‘Om’ mantra). He got back his creative function, which he was deprived of by Murugan for failing to worship Lord Subramanya en route to Mount Kailasa.

The important annual festivals are the Aadi Krittikai and New Year Step Festival. In Aadi (July-August)month, the float festival is celebrated while Brahmotsavam is held in the month of Maasi (Feb-March). During this time, Valli Kalyanam is celebrated on the 8th day, and the Skanda Sashti is celebrated in the Tamil month of Aippasi (Oct-Nov). There is also the monthly Krittikais, which attract a large number of devotees to this shrine.

Devotees pray for child boons, good marriage alliance, for family welfare, prosperity, and long life. Those suffering from any mental traumas, confusion, or anger, seek blessings of a calm and clear mind.

The sandal paste used for pooja is dissolved in water and consumed by the devotees as it is believed to cure diseases.

Those who seek academic excellence pray to Bhairava, who is present with four dogs as his vehicles, each representing the four Vedas.

How to reach Tiruthani Murugan Temple:

The closest airport to Tiruthani Temple is the Tirupati Airport, which is about 63 km away. Buses and Taxis can be used to reach the temple from the airport. A major International & Domestic Airport is located in Chennai at a distance of about 97 Kms.

Tiruthani Murugan Temple is about 3 km away from Tiruthani Railway Station. Auto and Bus services are available to reach the temple. The main Railway Station is at Arakonam, Thiruvallur.

The temple is about 2 km from the Tiruthani Bus Stand. Buses are available from the bus stand. Tiruthani is about 97 km from Chennai, 42 km from Thiruvallur, and 42 km from Kancheepuram.