The Banashankari Temple is A Hindu Shrine located in the Garden city of Bengaluru and is dedicated to Goddess Parvati, Lord Shiva’s consort. Parvati is considered the Mother Goddess and the progenitor of all living beings. The Goddess is also known as Shakambari which means ‘The Vegetarian Goddess’ and considered the sixth incarnation of Goddess Durga . She manifested here as Goddess Banashankari and the entire area takes its name from her. The temple is highly popular among the local populace and a huge number of devotees visit the shrine every day. It is a famous tourist attraction frequented by people from all over India and also foreign shores. It also holds the distinction of being the richest temple in Bengaluru and the Government of Karnataka has taken it into the purview of the Endowment Department. 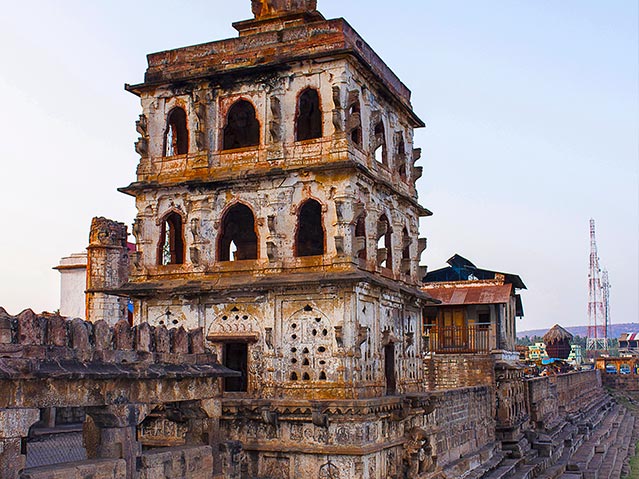 The Banashankari temple is of recent origin and dates back to the year 1915. It was founded by Somanna Shetty, a staunch devotee of Goddess Banashankari. He is believed to have brought an image of the Goddess from Badami, a holy place in Bijapur district. The Image was installed with all due honors and respect for the deity, who blessed the spot with her munificence.

The unique feature of the temple is that the deity is worshipped in Rahukala, which is considered an extremely inauspicious time according to the Hindu faith. The Goddess is believed to be most powerful during this time and Devotees strongly believe that worshipping her during Rahukalam will free them from troubles and rescue them from penury. A large number of devotees visit the temple, particularly on Tuesdays, Fridays and Sundays. A significant ritual in the temple is offering prayers by lighting oil lamps in half cut lemon peels, whose pulp has been removed.

The temple is built in the Dravidian style of architecture and reflects the craftsmanship of the early 20th century. It is a magnificent edifice built to honor the Supreme Goddess and constructed according to the tenets of temple architecture.

The temple is open on all days, but special pujas are held on Tuesdays, Fridays and Sundays. The temple celebrates several auspicious occasions and attracts a large number of visitors during the festival days. September 13 is celebrated with great pomp and fervor as it is observed as the Birthday of Banashankari Amma. The temple anniversary in Pushya Maasa, which falls in the end of December or the first week of January is also a huge occasion of celebration. An annual fair is also held during this period to mark the occasion. People from Bengaluru city and from different parts of Karnataka visit the temple to take part in the festivities. Dussehra festival celebrations in October, November are also held with great fanfare in the temple. All Pujas performed in the temple adhere to Shaiva Agama Siddhantha rites and this practice is strictly observed.

Worshipping Goddess Banashankari, who is an Avatar of the Supreme Goddess of Shakti Maa Durga, is said to remove hardships and free one from the clutches of poverty. The Goddess fulfills the desires of all those who pray to her with strong faith and belief. Praying with true sincerity melts the heart of the Goddess and she confers her grace on all those who come to her.

Location – How to reach Banashankari Temple

Banashankari Temple in Southern Bangalore, located on Kanakapura Road, is easily accessible and one of the most important pilgrim centers in Bengaluru.

By Air: Bengaluru is a thriving metropolis and is well connected to the rest of the country by Air. The Airport is approximately 40 Kms away from the Temple.

By Train: The Temple is about 8.5 Kms from the Bengaluru City Railway Station.

By Bus: The main bus stop is situated close to the Railway Station with regular buses plying to and fro from the temple.

Local Transport: Taxis, Buses, three wheelers are available from any part of the city to take you to the temple.