Introduction about the Shankaracharya Temple

The Shankaracharya Temple is an ancient Hindu shrine located on top of the Gopadari hill on the Zabarwan Mountain in the scenic city of Srinagar. It is also known as the Jyesteshwara temple and Pas-Pahar by Buddhists and recently also took on the moniker of Takht-e-Suleiman (Throne of Solomon). Located at a height of about 1,000 feet, the shrine offers a panoramic view of Srinagar city. The temple is dedicated to Lord Shiva who is represented by a Shivalinga in the Sanctum Sanctorum. It is a popular religious and spiritual center of pilgrimage in the Indian state of Jammu and Kashmir, attracting numerous devotees and visitors from all over the world. 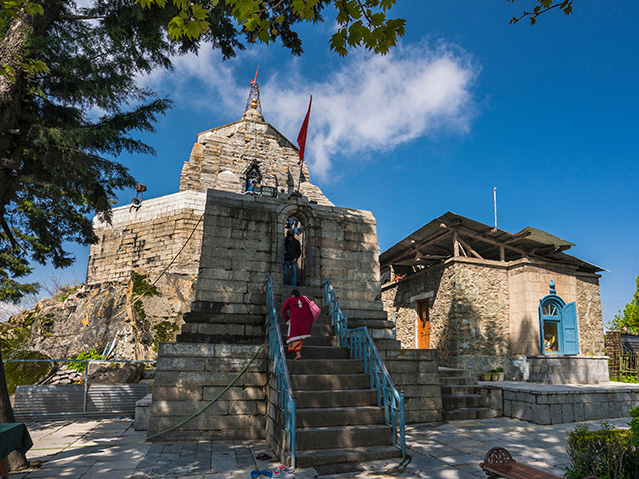 History of the Shankaracharya Temple

This splendid temple was built sometime in 200 B.C by the great Indian Emperor Ashoka’s son, Jalauka. It was renovated and rebuilt by King Gopadatta of Kashmir in the 1st century. The king dedicated the shrine to Jyesteswara, and it was subsequently renamed Shankaracharya by the Hindu Maharaja in 1848. Several Persian inscriptions are found inside the temple which indicates it dates back to earlier times. Zain-ul-Abidin is believed to have repaired the roof which supposedly collapsed during an earthquake. The steps from the Durga Naag temple side were constructed by the Dogra King Gulab Singh and the Maharaja of Mysore is credited with installing electrical fittings inside the temple.

The statue of Adi Shankaracharya was placed inside the temple by the Shankaracharaya of Dwarkapeetham in 1961. The present structure is believed to date back to 9th century and the Shivalinga was placed inside in the 19th century during the reign of the Sikhs. The temple became a hub of activity during this period and regular services were conducted within its premises. The Muslim Governor Sheikh Ghulam Mohi-ud-din is also credited with repairing the dome sometime in 1841 – 1846 during the reign of the Sikhs. The fortunes of the temple experienced a revival during the Sikh period, with prayer services and festivals like Shravan Poornima being celebrated in the shrine.

Significance of the Shankaracharya Temple

Many sources suggest that the temple was a Buddhist place of worship at some time and was changed into a Hindu temple by the great saint and philosopher Adi Shankaracharya who sparked the revival of Hindusim in the country. He is believed to have lived in the temple and underwent severe penance to renew the tenets of the Hindu faith. The Shivalinga in the Sanctum Sanctorum was the focus of Adi Shankaracharya’s worship and he is said to have attained a higher plane of understanding.

Many stories abound about the visit of Jesus Christ to the temple, with inscriptions within the temple clearly supporting this fact, and it is thought that he might even have lived here for a long period of time.

Architecture of the Shankaracharya Temple

This ancient temple is built in the indigenous early Kashmiri style of architecture and embraces the techniques prevailing in those days. The early Shihara style is prominently evident in the building design and is indicative of a horse shoe arch type of pattern. The steps leading up the hill from the Jhelum river banks were removed by Muslim invaders and used for the construction of a mosque. The octagonal solid rock base of the temple is 20 feet tall and the temple is square in shape. A stone staircase leads to the square terrace of the temple and a doorway to an interior circular chamber. Four octagonal columns support the ceiling and surround the area where the Lingam, encircled by a snake is placed.

Location – How to reach the Shankaracharya Temple

The temple is open for regular worship and many pilgrims visit the shrine during the Amarnath Yatra. Two hundred and forty three steps lead to the temple and a few more lead to the temple hall. The view from the hilltop is stunning and offers an aerial outlook of Srinagar city. Srinagar is easily accessible by several modes of transportation from most cities and towns of India.

By Air: The nearest Airport to the Shankaracharya temple is the Srinagar air force base Aerodrome which is about 11 km from the temple.

By Train: Nowgam Railway Station in Srinagar city is about 17 km away from the temple.

By Bus: Srinagar is easily accessible by bus and well connected with neighboring towns and cities.