Introduction about the Lakshmi Narayan Temple

The Laxminarayan Temple is a Hindu shrine dedicated to Lord Vishnu, the preserver and protector of the Universe and Goddess Lakshmi. Also known as the Birla Mandir, it was built over a span of 6 years from 1933 to 1939. It was inaugurated by Mahatma Gandhi and constructed by the prominent Birla family. The complex houses side temples of Shiva, Krishna, and Gautama Buddha. Spread over an expanse of over 7.5 acres, it has many shrines and fountains along with a large garden with exquisite Hindu and Nationalistic sculptures. It also has several other shrines dedicated to Lord Ganesha, Hanuman and Goddess Durga,the Goddess of Shakti. The temple is situated in the close to the prominent locality of Connaught place in the capital city of India, New Delhi. Many ornate carvings of Indian deities are displayed in the complex giving it a deep religious and spiritual elegance. People from all over the world are attracted to this unique temple and it draws crowds numbering into the thousands every day. 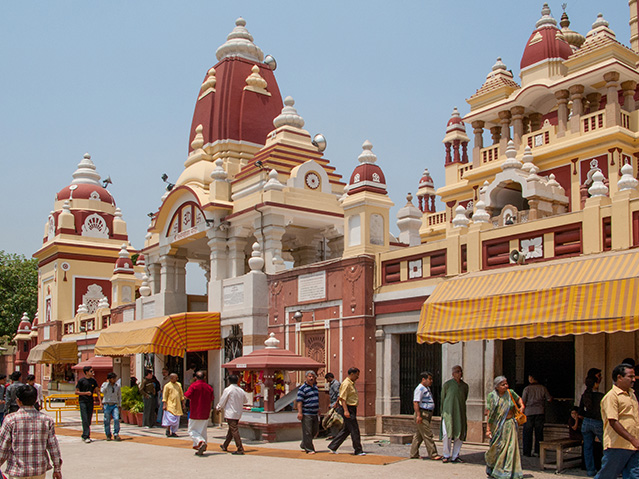 The Temple was built by industrialist Baldeo Das Birla and his son Jugal Kishore Birla and hence it is also known as Birla Mandir. Built under the guidance of Pandit Vishwanath Shastri, the foundation stone was laid by Maharaj Udaybhanu Singh. The Birlas are credited with building many temples all over India and often lend their name to the complexes.

Mahtama Gandhi imposed a condition that the temple should be open to all castes, especially untouchables and not be restricted to Hindus alone. This magnificent structure has a modern touch to it and the interiors are adorned with beautiful carvings portraying mythological scenes. The walls are rife with Hindu symbols, along with quotes from the Bhagavad Gita and The Upanishads. The Geeta Bhavan hall is dedicated to Lord Krishna and adorned with intricate paintings straight out of Indian mythology. The upper gallery is full of Indian paintings and replete with tasteful traditional art. A unique feature of this temple is the numerous fountains and cascading waterfalls along with the artificial landscape which have been developed all around the premises.

Sris Chandra Chatterjee is credited with being the architect of this magnificent shrine and he incorporated several new ideas and techniques in its construction. Modern materials have been used extensively in all the structures in the complex which lend it a contemporary look. Inspired by the Swadeshi movement, the architect has added touches of traditional and modern in equal measure, which contribute to its imposing façade. This impressive complex houses icons made from the finest quality Jaipur marble, which was carried out by more than a hundred skilled artisans. High quality Kota stone from Makarana, Agra, Kota and Jaisalmer was also used widely in the construction of this unique temple.

The temple celebrates the birth of Lord Krishna and the festival of Diwali with great pomp and splendor. Goodwill and cheer abound in great measure during the festive season with the entire complex being decked up for these auspicious occasions. People from all over the world are drawn in great numbers to its precincts during these festivals and everyone takes part in the proceedings with great enthusiasm.

Lord Vishnu is the giver of wealth and Goddess Lakshmi is the controller of these riches. Hence, devotees visit the temple to gain the blessings of these deities for health, wealth and prosperity. People also seek the benevolence of other deities in the temple precincts, since it hosts an abundance of several other shrines. People of all faiths and religions, irrespective of caste or creed, throng the temple to worship and seek God’s protection with equal fervor.

Location – How to reach the Lakshmi Narayan Temple

Located on Mandir Marg, and situated west of Connaught place in New Delhi, the temple is a prominent tourist attraction and draws visitors from across the Globe. The famous New Delhi Kali Bari temple is also situated on the same road, which is convenient for visitors.

By Flight: Since, New Delhi is the capital of India, it has a highly developed and busy Airport which is well connected by regular flights to almost all domestic and International cities.

By Rail: The city is well linked by rail to all major cities of the country with trains plying frequently at regular intervals.

By Bus: There are regular buses plying from neighboring states and towns to the New Delhi.

Local Transport: The Temple is easily accessible by taxis, local buses and autorickshaws and the nearest metro rail station is R. K. Ashram Marg, which is located about 2 km away.